So, when we last left our Warriors of Light, they had bumbled around the World Map, discovered magic shops rather belatedly, and found our sleeping beauty, the Prince of Elfheim, cursed and cast into a 5-year sleep by the dastardly Dark Elf Astos.

Spoo attempted to rouse Prince Charming with a kiss… 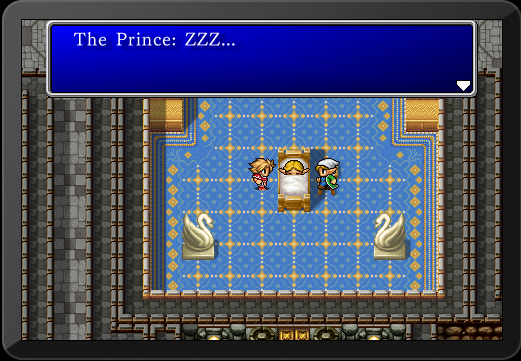 Alas, the Elven healer informed us that we needed a special medicine.

Love interest established, we wandered off to the next plot waypoint.

Oh yeah. MiniMap Easter Egg if you tap and hold the party menu! 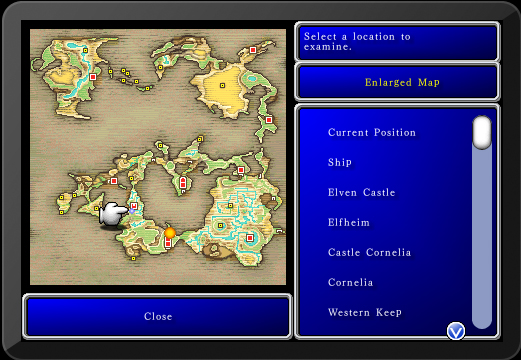 EAT YOUR HEART OUT FFX/FFXIII PCs, WE HAVE A WORLD MAP: 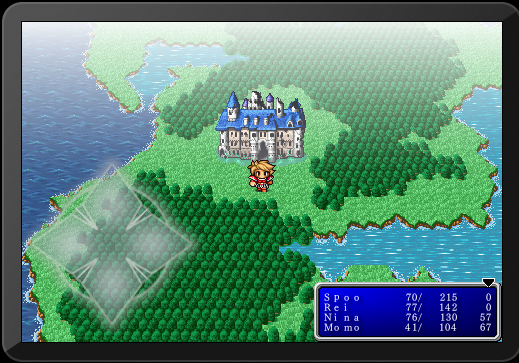 We enter Fallen Keep, whose population consists of bats… 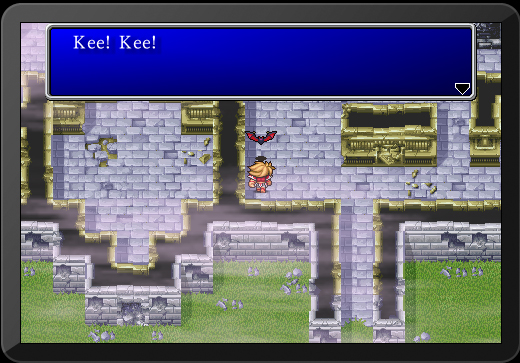 …and one King in a suspiciously immaculate throne room, blaming the Dark Elf Astos on his decor issues: 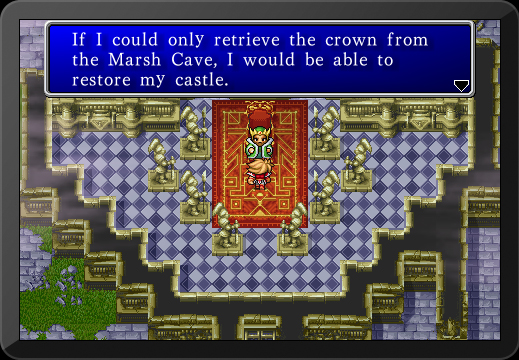 Rei: But then you’d lose the badass “ruined castle” music!
Nina: And the little bats that say “Kee!”
Momo: Did the evil Astos dude turn all your servants into bats, or what?
Spoo: *still pining for prince*

Several ogres, werewolves, and other random encounters later, we find Marsh Sinkhole Cave and take a quick nap to heal up: 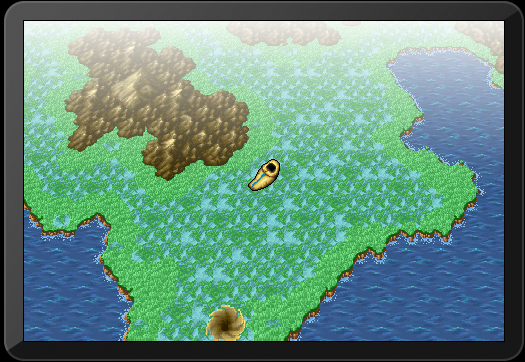 Rei: That sleeping bag looks like a maggot.
Nina: Mud in the bedding. EW.
Momo: I totally expected a stony, dry cave under a marsh.
Spoo: …

Suffering Basic D&D flashbacks from all the battles with green slime, gray ooze and skeletons, we slowly fight our way through our first serious dungeon crawl… 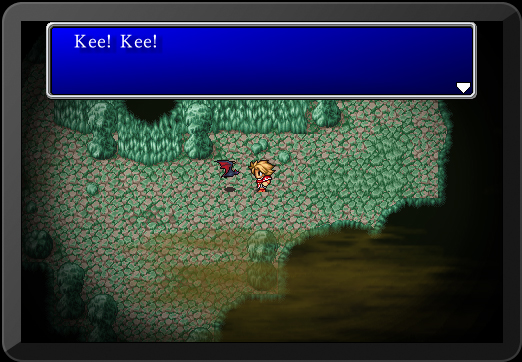 Rei: Another damn treasure chest containing a weapon we bought in the last town.
Nina: KEE BAT! SO CUTE!
Momo: Why are there moving clouds in an underground dungeon?
Spoo: … 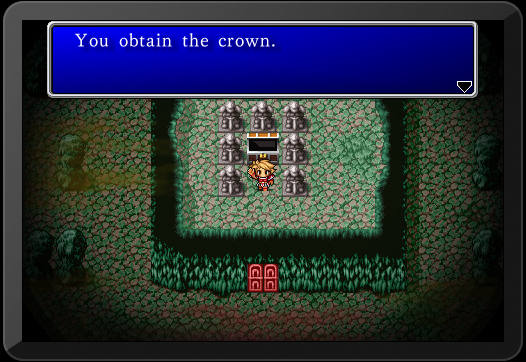 Rei: %@$#! Piscodaemons. That battle was actually hard.
Nina: Mindflayers by any other name…
Momo: Well, at least we found it. I was beginning to think we had to talk to every stupid bat in the dungeon to get the crown to materialize.
Spoo: .oO(will this help the prince?)

Battered, bruised, scraping the bottom of the MP barrel, but determined to complete our fetch quest, we carried our prize back to Fallen Keep. There, predictably… 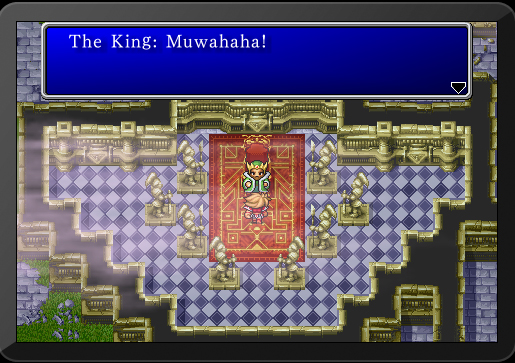 Rei: Muwahaha? What kind of a dorky villain laugh is that?
Nina: We forgot to save our game before entering the Keep, didn’t we? Yes. Yes, we did.
Momo: A grenade might be in order here.
Spoo: …

…The Fake King turns into Astos, the Dark Elf Baddie, and demands the crown so he can become the new King of Elfheim… 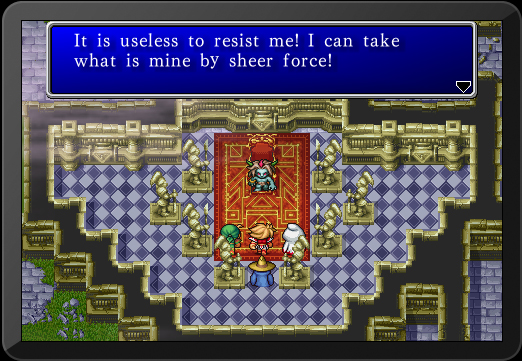 Rei: Yeah, right. Spoo’s so not falling for you. He’s got it bad for the real Elf Prince.
Nina: Ass-Toes is not a dignified name for a villain.
Momo: Somewhere, the gaming group that I pulled this trick on with the Eye of Vecna is laughing.
Spoo: *BRISTLES ON BEHALF OF PRINCE!!!!!*

I waste my only Ether in a panic-attack, but we survive the battle and slay Astos. Hey… waaait…. we’ve killed Garland AND Astos, the only two named villains so far? Surely they’ll be back to bother us later? ANnnnyway, Astos drops a Crystal Eye, which we happen to know from World Map Wanderings belongs to the witch Matoya, she of the self-sweeping broom house. Time to cash in a Plot Coupon!

After a much needed stop in the Inn, buying more firepower for Momo, and healing magic for Nina, we head north to return Matoya’s Eye to her… 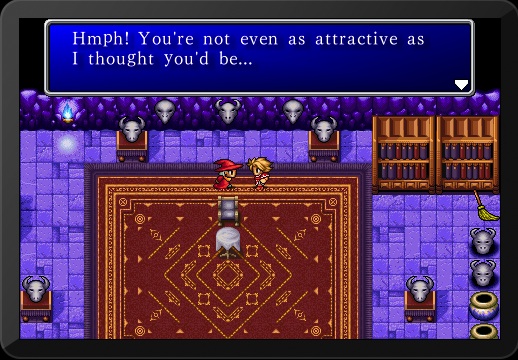 Spoo high-tails it back to Elfheim, where the Healer administers the special Jolt Tonic tea… 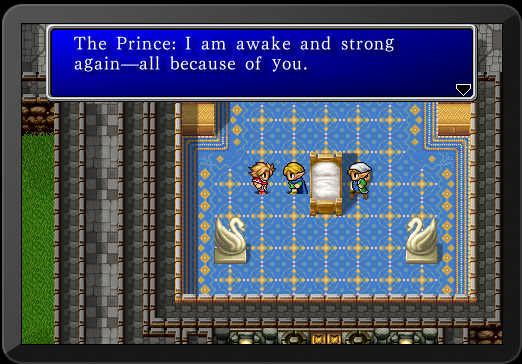 Rei: Cool! Elf-boy gave us the Mystic Key so we can unlock all those @%#! locked doors we’ve been seeing! Treasure hunt time!
Nina: Rei, Spoo needs a moment…
Momo: I’d hoped that Tonic was a magic booster.
Spoo: *blushes, preens* (hoping for something else, too.)

Rei: I reckon we’ve about cleared out all the treasure in these parts.
Nina: So it’s time to check on Elfheim and restock supplies.
Momo: AIRSHIP!? Yo, baby! Lemme at it!
Spoo: *still trying to muster nerve to ask Prince to tea*

Finding “Nitro Powder” in a stray treasure chest, we pry it from Momo’s fingers and deliver it to the Dwarves… 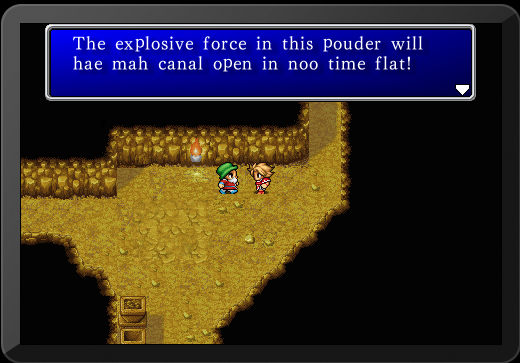 Rei: I’m not so sure I like the idea of opening a canal while in a SUBTERRANEAN CAVERN.
Nina: Spoo, hold Momo down.
Momo: I wanna try! Let me set the charge!
Spoo: *sits on Momo*

Fleeing the Dwarven caverns before they flood, we venture out to survey the damage… 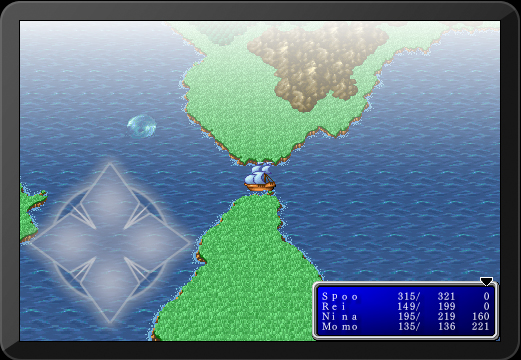 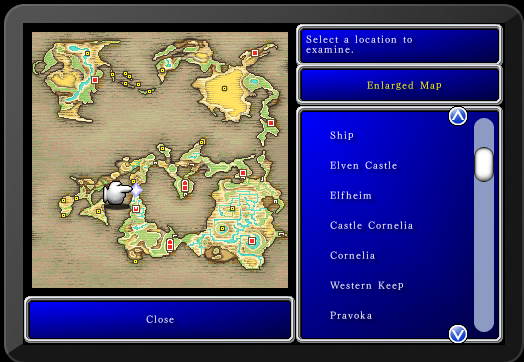 Stay tuned next time for the rest of the World Map, Rei’s Very Unpleasant Surprise, and… hopefully… finding out what these blasted crystals are for before Momo tries to tap them for power…