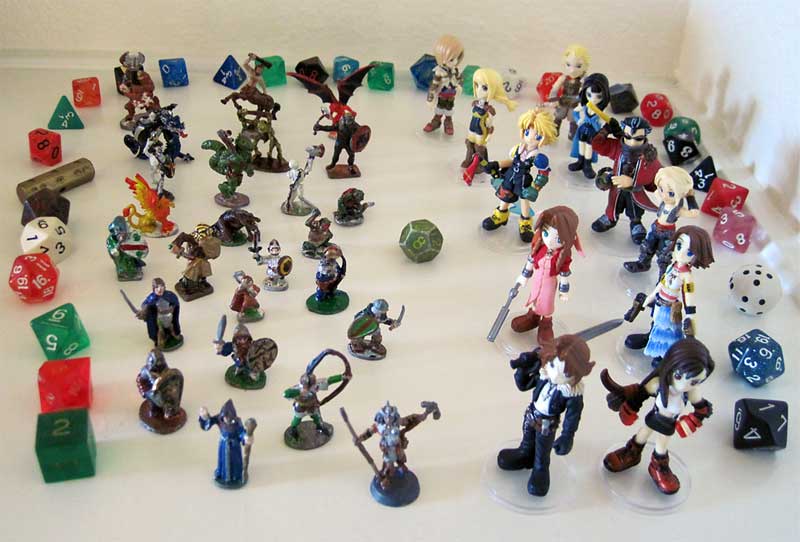 Bestiary: The world of old Final Fantasy is populated almost entirely with critters lifted straight from 1st edition AD&D — see the list at the bottom of this post. Even the hitherto-unusual use of “fiends” for “monsters” seen in the “Four Fiends” sounds like it was inspired by AD&D’s alliteratively-named Fiend Folio

. Also, we’ve got old-school D&D Elves and Dwarves, which were borrowed from (and changed from) those of Tolkien’s Middle-earth. Astos the “Drow Elf” is a dead giveaway: drow elves were a D&D creation. So too were Bahamut the Platinum Dragon, patron of lawful good heroes, and Tiamat the five-headed dragon, patron of chaotic evil; both were drawn from Arabic and Babylonian legends, but in real-world mythology were very different.

White Mage: Until now, I’d missed the fact that Final Fantasy’s White Mage class derived from AD&D’s “Cleric” class, a fighting priest permitted to participate in war so long as he/she didn’t used edged weapons. Hence: hammers, clubs, flails, morning stars. (I usually played the party cleric, so why did I fail to notice this?) D&D clerics served pagan or invented fantasy deities, carried some kind of holy symbol, and had temples or churches — echoes of which continue to reverberate right up to Yuna and even, to some extent, Vanille. The cleric class had decent HP, although not much as fighters, and had (I think?) high endurance. Clerics could cast healing and purification spells and turn undead to powder. (Dia/Diaga spells in FF). All this was ported straight to FF’s original White Mage, who was thus NOT simply an inverse of a black mage.

Black Mage: Whereas the Black Mage ported D&D’s old “Magic User” character class. MUs were notoriously low on HP, although they were smarter than everyone else.

Thief: Likewise, I don’t think old D&D thieves really were that big on stealing, since we usually just killed off monsters and ransacked the corpses for treasure. Instead, thieves were simply stealthy and quick and evasive and good at picking locks and discovering traps. Again, in FFI, the thief doesn’t have a “steal” ability and is more of a nimble fighter.

So the oddities of original FF character classes, with buff white mages and non-stealing thieves, are due to the source material. (Although the thief’s not stealing may also have been due to programming; it was probably easier to have a “now let’s add loot, gil, and XP to the party inventory” subroutine separate from the battle subroutine). Also, that explains why original Final Fantasy makes you pick a character class before the game starts, and that’s it. Whereas later FFs alternate between the “character locked into role” system of D&D or “job classes” or “sphere grids” which let you develop multiple roles per character.

Magic System: Furthermore, original NES Final Fantasy tortured its players with a magic system straight from D&D: magic users learned spells which were consumed like ammunition when cast, and could not be cast again until one returned to an inn/tent to rest for the night. The Dawn of Souls / Origins / 20th anniversary remasters replaced the obsolete magic system of 1st ed D&D with Final Fantasy’s in-house MP system, making the game much easier.

At this point these borrowings are essentially fair use, as D&D invented or popularized many stock fantasy trope and monsters which are now standard for the genre, appearing in numerous books, films and game systems. (Also, D&D itself shamelessly copied; it was largely an attempt to codify the adventure party / quest formula of J.R.R. Tolkien, with helpings of Lovecraft and Jorge Borges added for spice).

Essentially, just as D&D was a game that let us roleplay adventures like those in The Hobbit and The Lord of the Rings and other fantasy books inspired by them, Final Fantasy was a video game adaptation of tabletop roleplaying, allowing the computer to serve as Dungeon Master (GM) and for us to play D&D solo. It wasn’t the first game to do so — Ultima, Might & Magic, Temple of Apshai and many others had done so before — but it was a particularly effective video game adaptation of D&D mechanics.

How Final Fantasy differs from D&D

At the same time, Final Fantasy wasn’t only a video game adaptation of D&D. From the start, it began to move away from D&D tropes and mechanics (the white and black mages wielding light and dark magic, for example, and the “red mage” hybrid of the two).

It’s fun watching how many seeds of Final Fantasy concepts were planted with the original installment. A few I’ve noticed:

Chocobos, Summons, Mist, limit breaks and more complex weapons/spells/character customizations were yet to come, but nearly all the raw material is there.

I can’t experience FFI as a first time gamer, devoid of expectations or knowledge of the series. So I’m not trying to. I’m dialing up and seeking out the nostalgia.

Appendix: Bestiary of Final Fantasy I compared to AD&D

, or which were not present in the western fantasy genre until D&D popularized them: Rakshasa, Naga, e.g. (For that matter, we probably have D&D to blame for introducing dinosaurs and pleistocene animals to the regular mix of Greek and European mythological beasties.)

Italic = Final Fantasy monsters which are just a palette shift of other FF monsters; usually the prototype is a D&D monster.

Even when monsters are not unique to D&D, the Final Fantasy monster often borrows stats, abilities and status effects developed for D&D (Tiamat as a five-headed dragon instead of watery primordial chaos, green dragon breathing poison, e.g.).