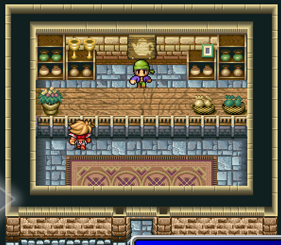 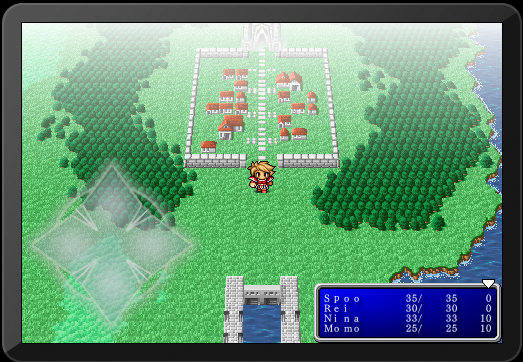 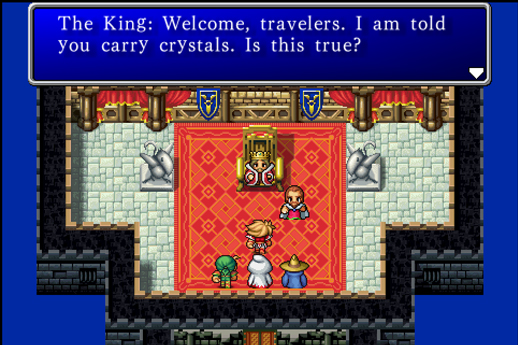 Rei: Yeah, how much you want for ’em?
Nina: *BIFF*
MOMO: WHY IS MY HEAD BLACK WITH GLOWY JAWA EYES?
Spoo: …

King of Cornelia: Rescue the princess [YES WE’RE DEFINITELY BACK IN RETRO LAND HUH Sarah [YAY! SHE HAD GREAT SPELLS IN FFIII, BUT ISN’T RESCUING HER INGUS’ JOB?!]…

An hour of happy level grinding later, after killing numerous goblins and getting ass handed to selves with Gigas Worm — WTF is THAT doing in the starter outdoors area? — and having Momo KO’d twice, resurrecting her by crossing a priest’s palm with silver back in town… 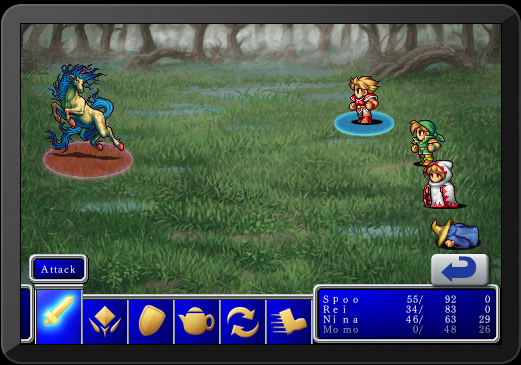 Rei: I’m a thief, dammit! Let me steal already!
Nina: Crystals, Rei. Crystals. If it’s like FF3, we’ll get skillz when we reach the crystals.
MOMO: I DEFINITELY WANT MY GRENADE LAUNCHER BACK KTHX.
Spoo: *Sweatbeads* (Ack! The gangster unicorns chased me all the way back to FFI!) 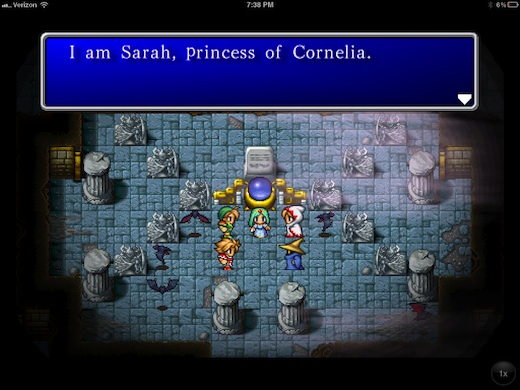 Rei: WAIT! Don’t teleport us back to the #%@ castle! We haven’t finished pillaging the dungeon!
Nina: Um, that crystal behind you?
Momo: Totally looks like ammo for my grenade launcher.
Spoo: …

Reunited with his daughter, King Whatsit drops the Plot Holdup Barrier to the north so that Our Heroes can set forth. Cue Strangely Delayed FF Title Sequence with nostalgia-inducing Uematsu soundtrack… 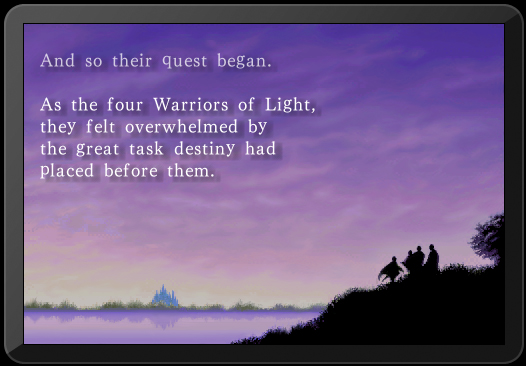 Rei: Y’know, we never did explore the NW corner of that town. Might be important…
Nina: I’m really quite disappointed in that princess. I rescued myself once or twice, you know.
Momo: So when am I going to find some magic or jobs or something to REPLACE MY GRENADE LAUNCHER?
Spoo: … 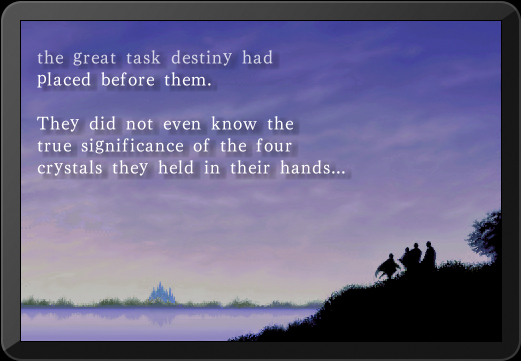 Rei: Like, if we hold these crystals too long, we’ll turn into dragons and destroy the world?
Nina: REI!
Momo: Betcha there’s some way to make them explode.
Spoo: *Poses majestically, in a way that is not at ALL Dragoon like*

SETTING FORTH, OUR HEROES WANDER AROUND THE MAP. They find…

In the Cave of Inigo Matoya… or something like that… 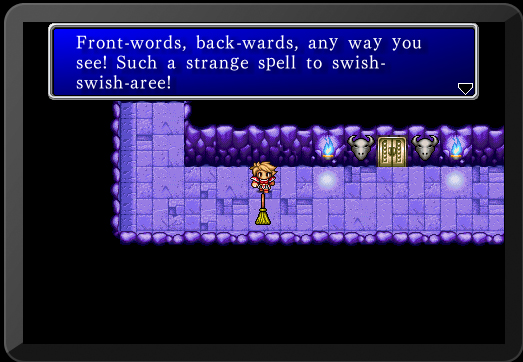 Rei: Well, don’t that just beat all?
Nina: If there’s a mouse in this house, I am so out of here.
Momo: A cleaner-bot! Now THIS is more like it! Show me the way to the grenade launchers!
Spoo: … 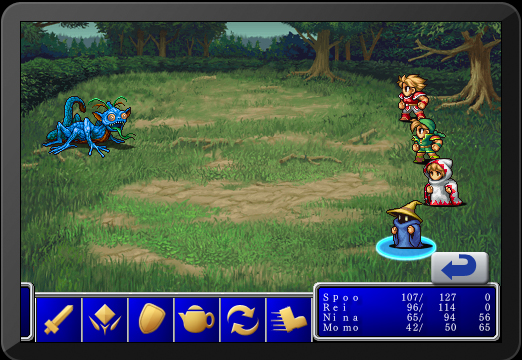 Rei: *flipping through Tory Peterson Guide to Random Monsters* That’s a lizard?
Nina: Or a very confused ant.
Momo: WANT… SPELLS….NOW!
Spoo: *Totally in it for the tea* 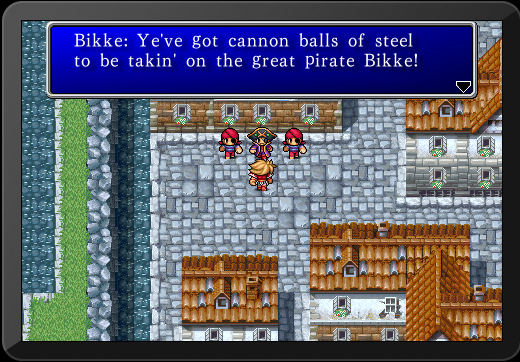 Rei: Cross-dressing pirate babe? Yeaaah!
Nina: Alas, that beard looks real. Too bad.
Momo: So, we whup the pirates, and they give us a ship? Man, none of this waiting until the penultimate boss battle to pick up an airship and get totally distracted with sidequests…
Spoo: …

Thankfully, Our Heroes manage to find a level 2 magic shop, giving Momo a spell to blow things up before she starts trying to hotwire the pirate ship… 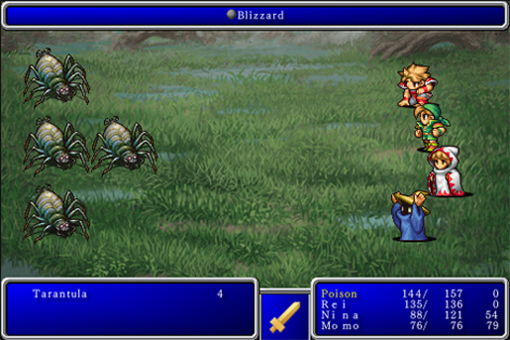 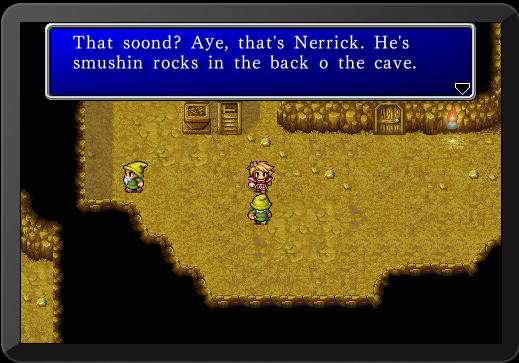 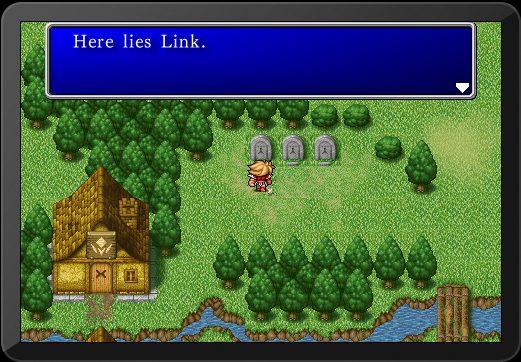 Rei: Well, crap.
Momo: I’m starting to get crossover whiplash.
Nina: Don’t be silly. We never got around to playing that game.
Spoo: … 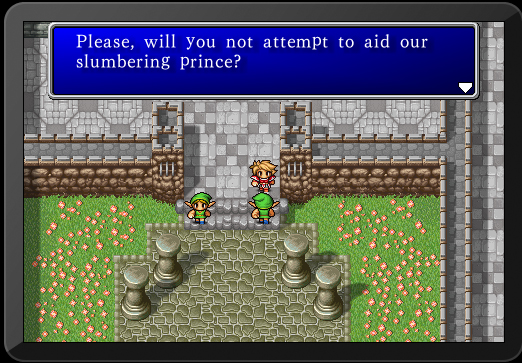 Alas, Spoo’s kiss fails to awaken the Prince of the Elves.

However, Nina vaguely recollects the King’s Chancellor saying that the only person in the entire planet with two clues to rub together is a dancing girl in Cornelia. Accordingly, we sail back to town #1 to ask her for counsel.

Behind the Tea Shop 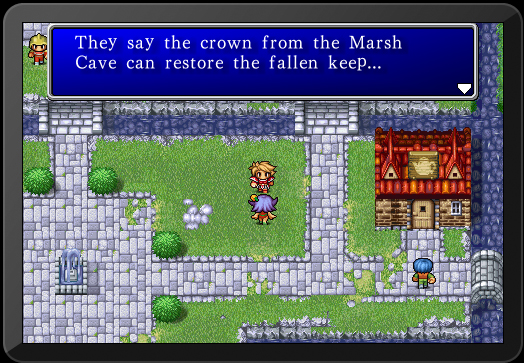 Rei: And this helps us how?
Nina: Plot, Rei. Plot signpost.
Momo: Just call her Bradygameguide in a Bikini.
Spoo: *pines for Prince of Elfland*

Also, taking a swing by the NW corner of Cornelia, we find two houses NORTH of the houses we thought were on the edge of town… 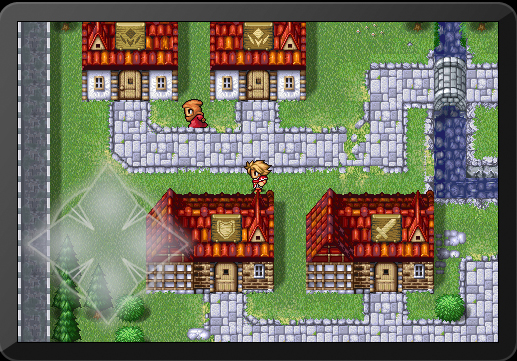 Rei: WHAT DID I TELL YOU?!
Nina: So that’s where to buy the Cure spell I’ve been wanting for the last two hours.
Momo: Fire spell! Thunder spell! BOOM!
Spoo: *facepalm*

Tune in next time to discover more plot coupons! When shall we find the Mystic Keys to open all the locked doors I didn’t bother screencapping? Will Spoo ever awaken the fair Elf Prince and invite him to tea?