Having restored the Earth Crystal, our Warriors of Light set off to find new adventures… 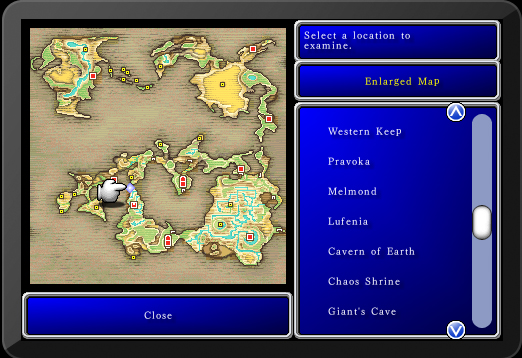 Rei: We could go back and talk to that mermaid in the whirlpool spa.
Nina: No, Rei. It’s probably another bonus dungeon like the Earthgift Shrine, and it won’t open until we restore the Water Crystal.
Momo: More bosses that KILL US DED.
Spoo: *sweatbeads*

But first, a quick stop in Melmond to check on the town… 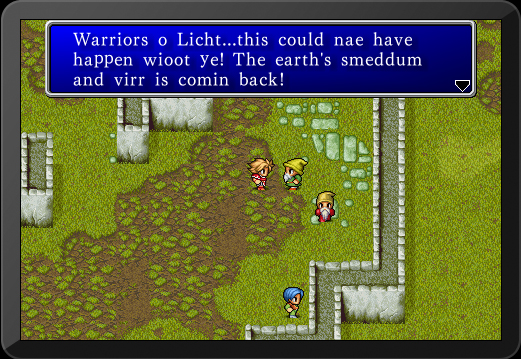 Rei: Do I want to know what “smeddum” means?
Nina: “Smeddum,” Rei. Not “smeg.”
Momo: Well, at least it sounds like restoring the Earth Crystal has helped things here. I think.
Spoo: …

After searching all over the place for a harbor where we can put in, we discover a lake with a suspiciously familiar shape on the southeastern continent… 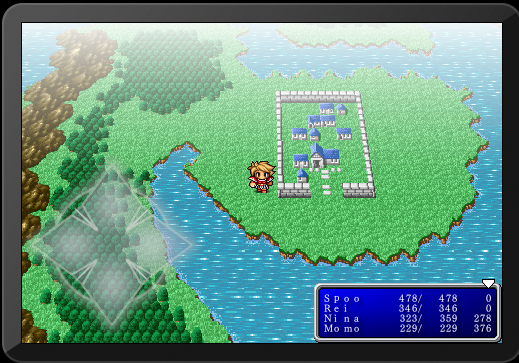 Rei: Crescent Lake…wasn’t that in FFV, too? Or was it VI?
Nina: You’ve been talking to Bibi again.
Momo: Ooooh, I think that’s usually where you get the airship, isn’t it? Hot diggity!
Spoo: .oO(Lucretia Crescent? Eek!)

Chatting up the townsfolk provides few clues, however… 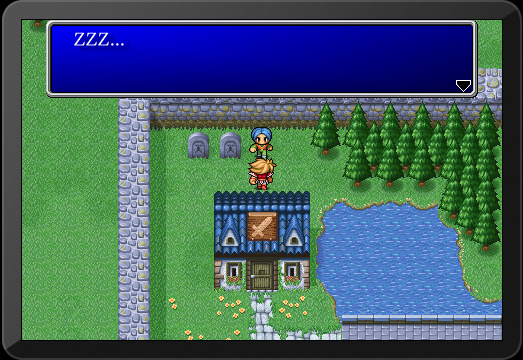 Rei: Uhh….alrighty, then.
Nina: *staring at gravestones looking for more easter eggs*
Momo: Am I the only one who finds it creepy that this dude is asleep with his eyes open in a graveyard?
Spoo: .oO(Vincent Valentine? Eek!)

Past the tea shop, we discover a mysterious circle of twelve old dudes, led by that git Lukahn whose prophecy started the game and sent us on this epic quest… 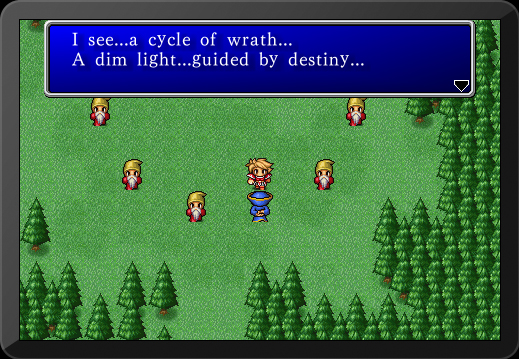 Rei: “Dim light”? That would be Spoo, right?
Nina: REI!
Momo: Hey, cool. It’s like 12 Maechen clones, each of them giving us mini Backstory Dumps on the plot. What little there is of it. And they’re arranged like a clock, see, because Exposition Dude always takes forever to say anything.
Spoo: .oO(Is that a folding canoe in your pocket, or are you just happy to see me?)

Having received vague backstory about the Four Crystals getting possessed by Ultimecia Darkness Gigameth Yu Yevon Four Fiends who first appeared at puzzlingly punctual intervals (400 years ago, 200 years ago; the trains must always run on time in Final FantasyLand), we take the pocket canoe and go off to explore Wild Rivers. While paddling, we meet up with old friends. No, not the crocodile… 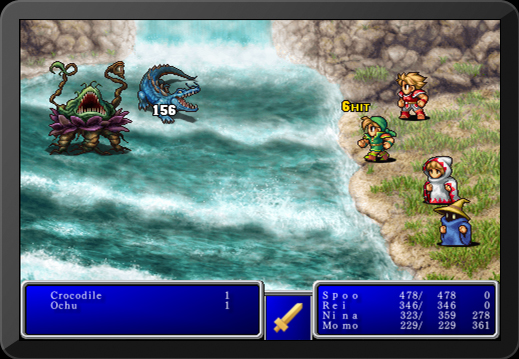 We find Mt. Gulg, on a tip from some Exposition Dude or other… 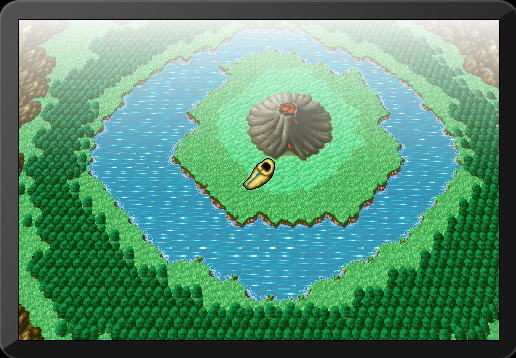 Rei: Active volcano is totally a great spot for camping. Break out the maggot sleeping bags, people!
Nina: I have a bad feeling about this.
Momo: We’re Warriors of Light! We’re inflammable!
Spoo: *does not think that word means what she thinks it means*

Far too many lava tunnels later… 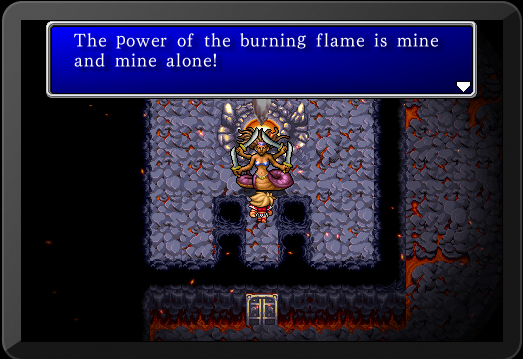 Rei: Well, at least the obligatory taunt has a little style this time. Nice biceps, too.
Nina: We got here by walking over FIVE MILES OF FRICKING LAVA. Apparently we’ve got the power of the burning flame as well, although I’m not sure how.
Momo: BOOM TIME! BREAK OUT THE FIRAG– er, I mean, uh… why don’t I have Blizzaga yet?
Spoo: *hopes Momo is recording this for the Prince* 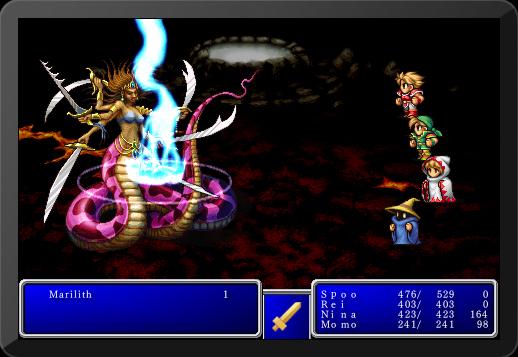 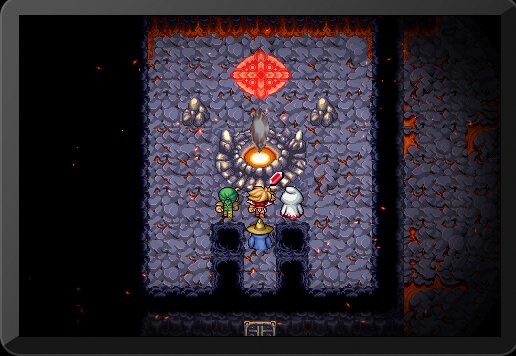 Spoo: *restores Fire Crystal with one of those pilot lights mini-crystals we’ve toted around since opening credits*
Rei: Well, that was fun. Are we getting paid for this?
Nina: Loot and glory, Rei, loot and glory. So now what?
Momo: I really think we ought to have an airship by now. Let’s try that Cavern of Ice that we passed on the way here. 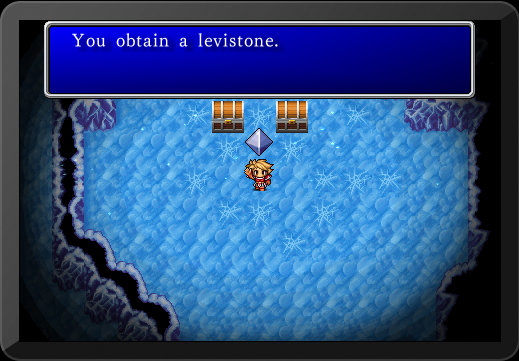 Nina: Careful not to fall through any more holes in the ice on the way out.
Rei: Are you kidding? Half the treasure’s down there! And we’ve got Spoo all buffed up now, so we can just stand behind him.
Momo: Levistone? Cool! Wonder what happens if I bolt it to our ship?
Spoo: *plays with shiny new sword and shield* 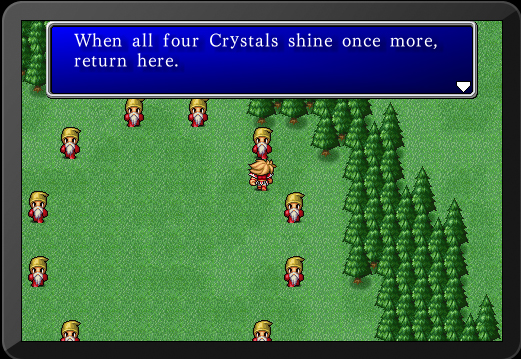 Rei: NOT HELPFUL.
Nina: Wanna give us any hints on how to achieve that?
Momo: Team Fortune Cookies seems to be a bit short on detail.
Spoo: *pines for prince*

We scour the world looking for clues and tips… 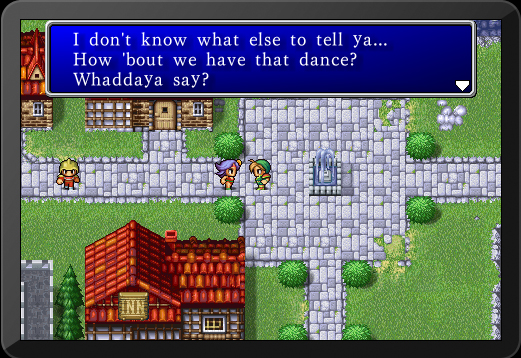 Rei: Sounds good to me.
Nina: REI!
Momo: When’s the last time she actually gave us useful hints? Bibi, you are FIRED.
Spoo: *pines for prince*

Back at the Dwarves’ Cave… 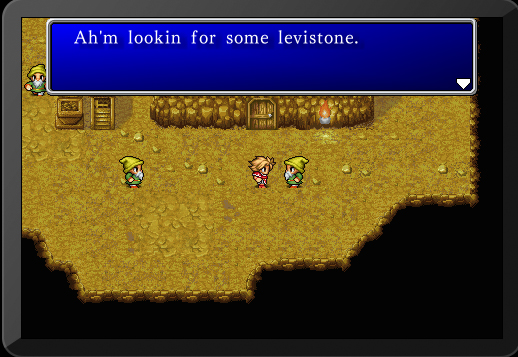 In the only place we haven’t explored, a dead end cave down in the Wild Rivers area… 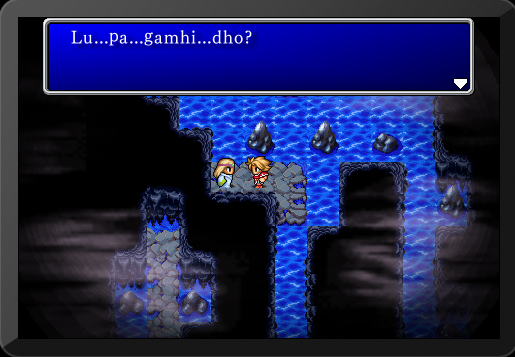 At last, frustrated and discouraged, the party returns to Elfheim… 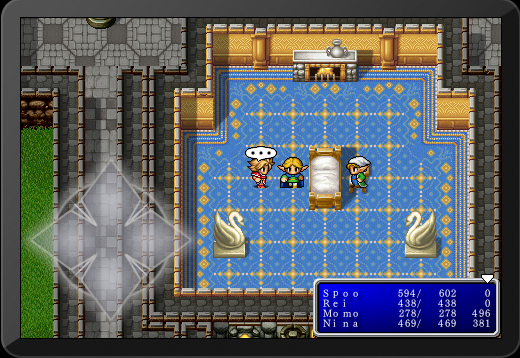 Rei: So, Spoo’s gone off to the castle. Think he’ll score?
Nina: REI!
Momo: It would help if the poor boy could string two words together.
Spoo: *knocks chaperone on head and takes prince to tea*

While Spoo’s off on his date, Nina makes an exciting discovery… 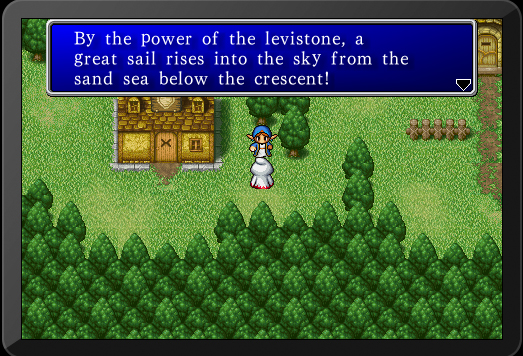 Rei: Hmph. Bibi’s cuter.
Nina: Shut up, Rei. This is it! The clue we’ve been searching for!
Momo: AWESOME! SPOO, GET BACK HERE, WE’RE LEAVING!
Spoo: … (I’m not liiiistening)

The following day, having collected Spoo from the castle… 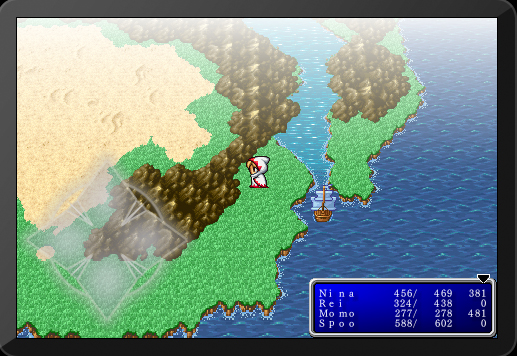 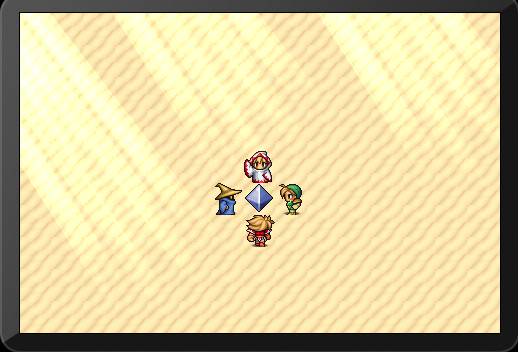 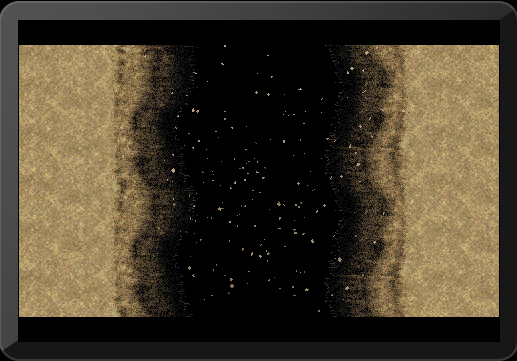 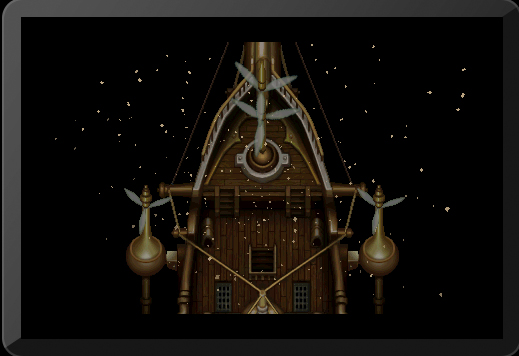 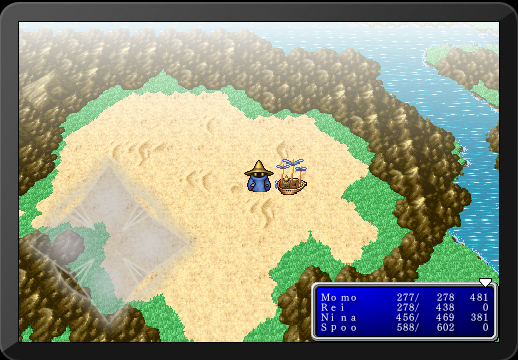 Rei: Can I talk now?
Nina: Only if you don’t spoil the moment.
Momo: *hugs cute widdle airship* Okay, everybody! Let’s chase that horizon!
Spoo: .oO(Let’s flee, in case FFX Cid is standing by with his desert nukes…) *sweatbeads*

That’s all for now! Tune in next time, folks, for our search for fabulous dresspheres class upgrades!