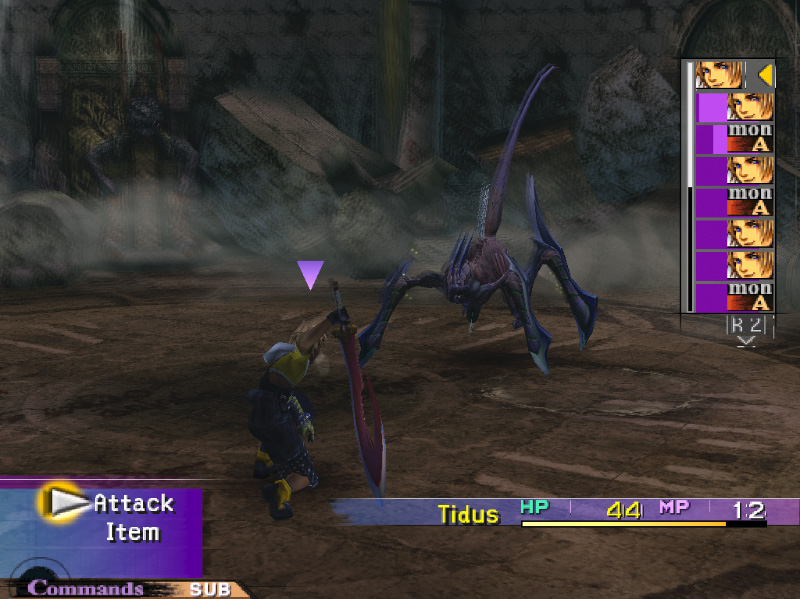 In the nick of time, the You-Can’t-Go-There-Yet door blasts open from five jillion dramatic camera angles, and a barbershop quartet of begoggled dudes bursts in carrying bayonets and flamethrowers (?). Rikku strolls in after them, suave in pink clogs, and plants her tush squarely in front of Ropp’s gun. 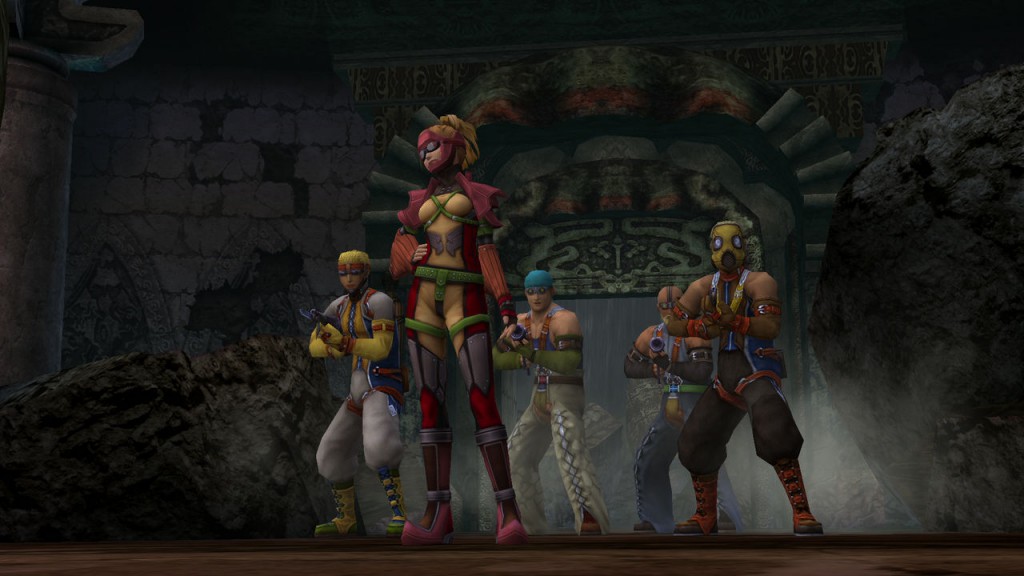 HD graphics have fixed Rikku’s cameltoe problem, but she’s still sporting a variant of the infamous Final Fantasy Battle Wedgie. Why is it that nobody in Spira seems to understand pants? Climbing harnesses cinched around the tops of poofy pantaloons do not look comfortable. At least Ropp and beard guy wear chaps, another Spiran eccentricity. 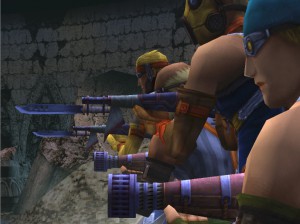 The Al Bhed have some of the best military hardware in Spira. (Which the Church of Yevon mistrusts.)

Enough fashion snark. Rikku cracks her knuckles at the ornery arthropod and taunts it with the same “come at me, bro!” gesture as Seifer and Balthier. My Final Fantasy Thief Motto kicks in: Steal everything you can use, sell everything you can’t. This proves delightfully effective in FFX, which combines the old thief job class (Steal) with alchemist (Use).

One explosion later, Tidus discovers his would-be rescuers may be his executioners. One of them guesses he’s “a fiend in human form!” Sounds like hasty conclusion-jumping, but as we’ll see in the Cavern of the Stolen Fayth, that’s exactly what can happen to people who die without a sending. Without summoners, Al Bhed may run into this problem more often.

Or perhaps they’re simply hunting the creepy blue-antlered abomination lurking in Baaj Temple. Seymour hasn’t lived in Baaj for a while, but who knows what kind of wild rumors filtered out. (Yes, yes, I know. You’ve found the fanwank playthrough edition. Here, pass the spackle). 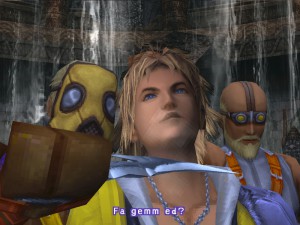 Al Bhed: We kill it?

After multiple playthroughs, it’s easy to forget how the Al Bhed are framed as potential villains for the first act. Disguising their dialogue (apart from the word “fiend”) reenforces the sense of threat, since we don’t know what they’re saying. Besides, it’s deep-seated human psychology to equate “unknown” or “foreign” with “sinister.” There’s several times when this game steers us into wrong-headed assumptions which it later undercuts.

Yet it’s not merely misdirection. While the Al Bhed are more often victims of “other = sinister” prejudice, they’re showing that very prejudice in this scene. They’re about to slit Tidus’ throat! 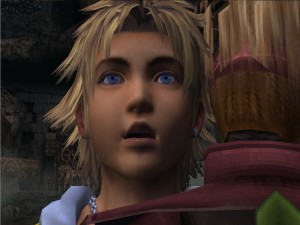 Actually, Tidus had this funny expression before she hit him. She’d mashed a b0ob against his chest.

Luckily for him, Rikku is less paranoid and more softhearted. Even so, the game strings out “friend or foe?” as long as possible, having her lean into him seductively, whisper something in his ear (“Sorry”), then punch him in the solar plexus. Betrayed, he gapes like a fish and goes down. This really isn’t his day, is it?

Transition scene: we see a metal-plated vessel under moody stormclouds which look great in HD, as does the water, and now you can really see the ship’s funky, almost Sin-like design below the waterline. 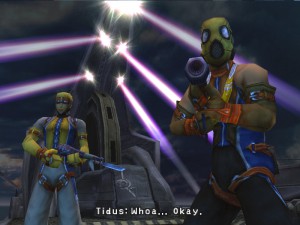 I used to think the blond guy must be Keyakku, Rikku’s friend  (or cousin?) who dies later in the game. But no, it’s another case of limited npc models (if you call 200 models limited). This npc turns up again much later, gazing out the airship’s windows. (“Your face, I have seen it before. Perhaps at the temple in Baaj?”) His partner with the gas mask reappears there as well. 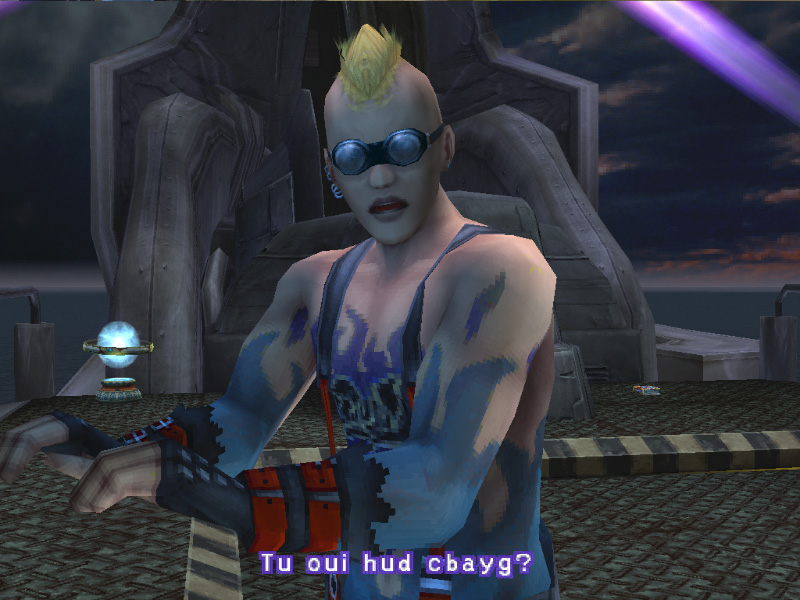 Brother: “Do you not speak?” (Note Al Bhed Primer I in background, right)

At last, our first glimpse of Brother. To think I once disliked this arm-waving lunatic! It still hurts my head that Brother (video clip) is voiced by the same actor as Al-Cid Margrace in FFXII (video clip).

After some creative charades, he shoves something in Tidus’ face that I always took for breathing apparatus. Actually, it’s a pair of goggles, which are both useful and (perhaps) a test to see if Tidus will wear gear that marks him as Al Bhed. He won’t. “Insolence!” says Keyakku-clone, leveling his bayonet at Tidus’ chest. Rikku intervenes again to save him. “He says you can stay if you make yourself useful!” A pity she didn’t offer to translate sooner. 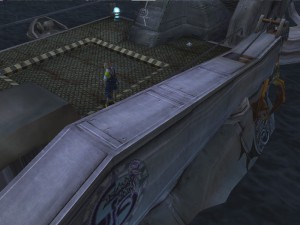 First things first! I like to piss off Brother by examining this crane before obeying orders. This time, I do not pick up Al Bhed Primer Volume I, so that I can discover its exact location in Bikanel Desert if we miss it here. The things I do for recaps. Note the “Cid: Salvage Dream” crest on the crane’s exterior; it’s the first time we’ll see this seal which is plastered on Al Bhed machina all over Spira. 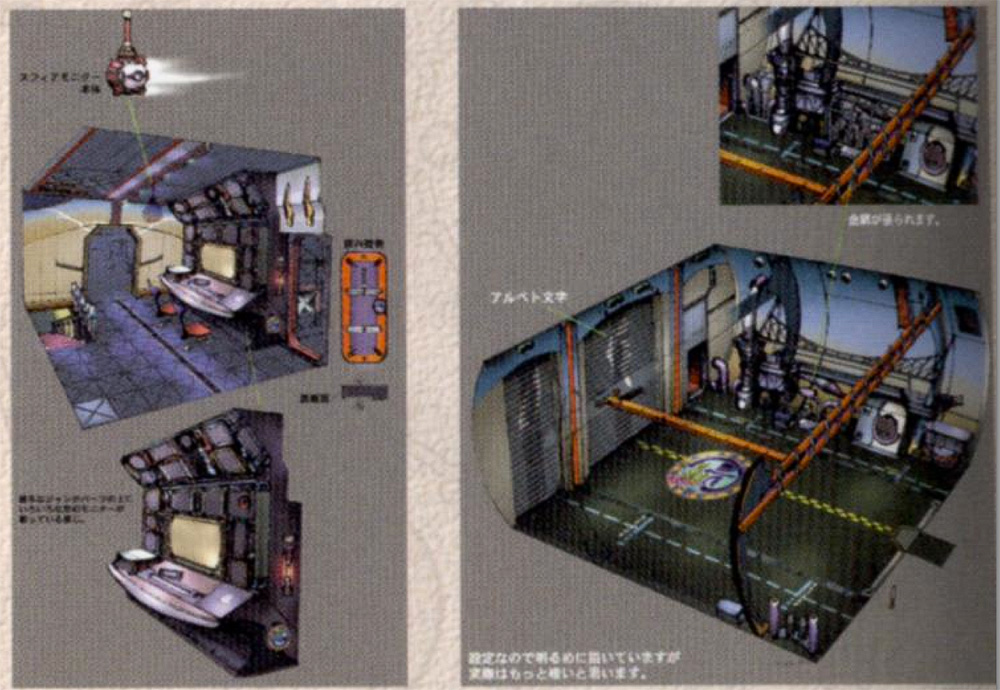 After collecting free potions from Keyakku-clone,* there’s nothing for it but to sit through Rikku’s Sphere Grid tutorial. Really, Squeenix? No “skip tut, I’ve played the game before” option? Tip: After the tutorial, do NOT talk to Nedus-clone, the guy in the gas mask. He asks if you want to hear the tutorial again. I’d rather dodge 200 lightning bolts, thanks. 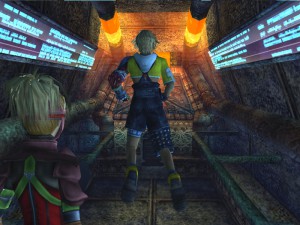 The Fifth Doctor (of Doctor Who) calls this the “ol’ targeted impact trick.” *bash bash bash*

Okay! Let’s get to work! Dive into the water for piranha pickpocketing (they look like anglerfish) and descend. After watching Tidus’ rudimentary tech support, Rikku mimics Lulu’s signature forehead-palm-headshake.

*After diving to the ruins, you can resurface to collect more potions from Keyakku-clone, again and again. Not really worth your time. 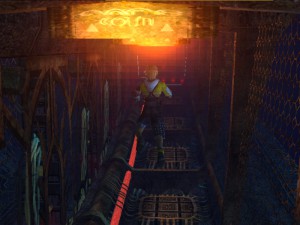 Inscription notes: overhead signs in the passageways say “GATE coil n” in Spiran script. No, I don’t know what it means either, but Ultimania confirms the transliteration.

Newer doesn’t always mean better: the HD remaster obscures these signs and the Spiran numbers on the machina in the next room. 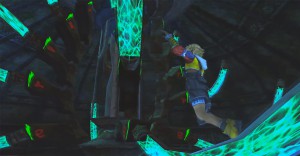 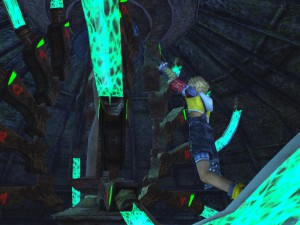 Boss battle time! Tros the squidmonster, like most FFX underwater monsters, is packing grenades in its pockets (!) which Rikku squirrels away in the party inventory. They’ll come in handy later. After a few rounds, we’re coached through a Pincer Attack. It’s a pity FFX didn’t have trigger commands for battle tactics more often.

Once we’ve slain Squiddy and swim outside, all the lights switch on, including searchlights that look much better in the remaster. Rikku points (it’s cute!) for Tidus to join her in scoping out the “big prize.” Other Al Bhed swim nearby to provide a sense of 3D depth, none of them wearing wetsuits apart from Rikku. (Come to think of it, she removed her goggles back in Baaj Temple, and never put them back on. Oops.) 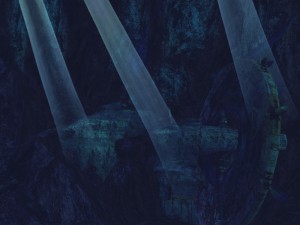 Earliest appearance for an airship in an FF game outside of FFIV, I think… (and Tidus is here, but TINY)

For once, there’s some logic to Final Fantasy’s habit of stashing airships underground or underwater instead of, you know, in the air. This whole complex seems to have sunk, along with the hangar. Mind you, when I first played, my TV was too dark to let me see the airship, so I didn’t recognize it rising out of the desert later in the game with a fabulous new paint job.

Back aboard Brother’s ship, Tidus trails after the begoggled quartet, who are excitedly discussing the airship and how to bring it up. (“The records were right,” one says.)  They slam the hatch in his face when he tries to follow them below. Poor pup, abandoned to sleep on a cold, hard floor again. Quite a comedown from being a star player just a few hours ago. 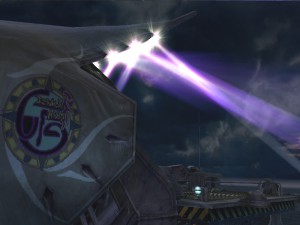 “CID Salvage Dream” on starboard side of ship.

At last, Rikku takes pity on the hungry stray and brings out a tray of what looks like curried noodles for him to gobble. They’re the first of many little touches that establish the world of Spira as Japanese rather than western. (Of course, previous FFs had Eastern details like Wutai and fish dishes, not to mention samurai and ninja job classes alongside European knights and bards, but they weren’t doing it so deliberately.)

So, Rikku. Can we talk about Rikku? As always with the “genki girl” archetype, she had to overcome my cute-phobia.  But beneath Rikku’s chirpy exterior is a shrewd, capable 15-year-old who calls people on their BS and doesn’t judge by appearances. She saves Tidus’ life and plans to divert her Brother’s ship all the way to Luca to help him find his team. And heck, she’s the only person we ever see taking pity on him enough to feed him! FFX Rikku rocks. X-2 emphasizes her bubblegum personality more than her brains, but she’s still a gal who will go to great lengths to help friends and family.

Rikku, now revealed once and for all to be an ally, explains about the Al Bhed. “Everyone thought oui were a fiend… oh, oui means you.” As she says “[you] were a fiend,” she makes a throat-cutting motion, reminding us of the scene in Baaj Temple. 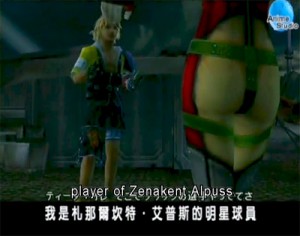 When Tidus introduces himself as “Star Player of the Zanarkand Abes,” Rikku decides he must be suffering from Sin’s toxin, which can play tricks on memory. He can’t be from Zanarkand, because it was destroyed by Sin — no mention of war! — a thousand years ago.

“No way!” Tidus pulls out the folding canoe and starts paddling desparately up De Nile. He can’t believe he’s been brought forward a thousand years. More sneaky misdirection: since he doesn’t believe it, most players are persuaded that’s exactly what happened. After all, time travel has been an intermittent part of Final Fantasy games all the way back to Final Fantasy I. But in fact, the reality is far stranger. He won’t discover the truth until the pilgrimage is nearly over.

Sin ec lusa! (Sin is come!) Its arrival brings an abrupt end to the scene. Dammit, Dad, first the tournament, now a date with a cute girl! 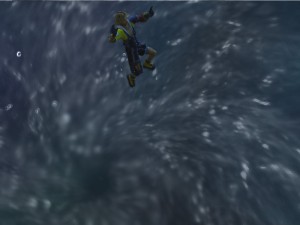 Swept overboard, Tidus again plummets helplessly into the depths. That’s four times in one day, isn’t it? He needs a bungie cord.

It would’ve been interesting to see how Tidus had fared as part of the Al Bhed crew. But the Path of Plot Advancement beckons. At least Dad allows Tidus to get some shut-eye while carrying him to Besaid. It was nighttime (or perhaps early dawn) on the salvage ship, but it’ll be full daylight when he wakes up.

Next time: Tidus falls off a cliff. Again. (With a push from Wakka.)