I have an odd fondness for maps, even though I get lost rather a lot. Here’s some maps I’ve cobbled together for various Final Fantasy games, some just for fun, others because I wasn’t satisfied with available online maps (or there just weren’t any available).

I haven’t done any FFI maps yet, but there’s some serviceable ones on these two fansites: here and here.

World map (I didn’t draw this one, I just assembled it from about thirty screencaps and labeled it, since the in-game world map has no labels and only shows one tiny section at a time.) 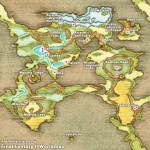 Most of FFIII is fairly straightforward, but I found myself making sketch maps of the endgame dungeons to make sure I didn’t miss any treasures. 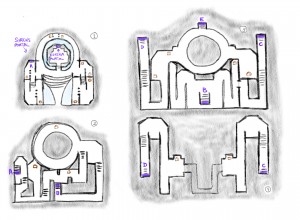 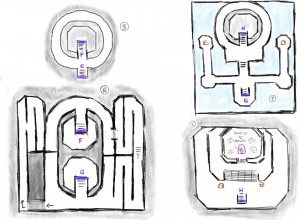 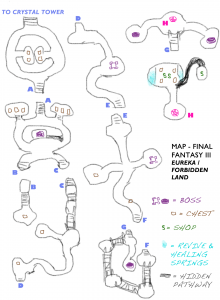 I… got a little silly with this map. (The in-game map with my own captions.) 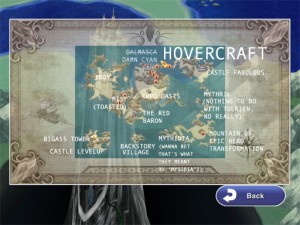 Aww, I love this game, but I haven’t gotten around to making any maps. Here’s good FFV world maps on someone else’s site.

Here’s my drawing of the World Map before everything goes to hell in a handbasket. I was trying to understand where on earth Sabin headed off to when he got separated. Here’s a version without the red line showing his epic journey. 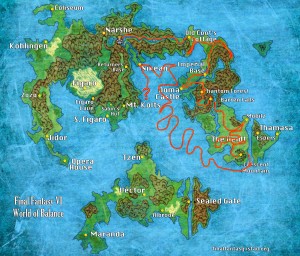 The in-game minimap shows a tiny inset world map with no labels, so I hunted around online for various official maps, traced ’em, then made the map above.

I haven’t made any maps for FFVII through IX.

Final Fantasy X has an in-game, realtime minimap, but it only shows a few dozen feet around Tidus’ current location.

For the next two maps, I took a whole bunch of photos with a digital camera while playing the game, assembled all the minimap views into one large map in Photoshop, traced the outline, then decorated them. 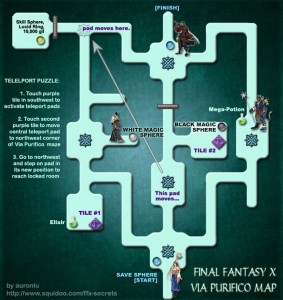 My Cactuar Sidequest map is probably the prettiest (having traced it as above, I imported it into an iPad painting app and had fun): 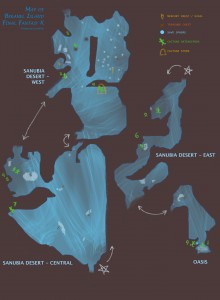 Also, I’ve got screencaps of all the Al Bhed Primer Locations, if you’re missing any.

This is a map of Spira that I drew for my AU fanfic story, Love Her and Despair. I’ve added Yocun Lodge and Mushroom Rock Lodge, but otherwise it’s the same as in-game. 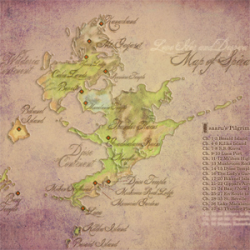 To make it, I took all the official maps of Spira I could find — oddly enough, they’re not all quite the same, and some are quite stretched from others! — overlaid them faintly in Photoshop, made my own approximate outline reconciling the inconsistencies between them, then discarded the official maps and went to town on my outline with brushes, textures and filters.

I’ve done a very in-depth map of The Great Crystal in Giruvegan. See that post for navigation and treasure-hunting tips, or click the thumbnails below for the raw maps (the left shows the bottom floors, required to advance the plot; the right is the upper floors, for optional sidequests.) 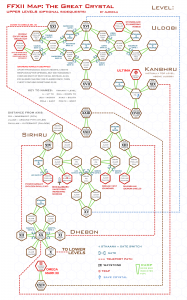 No tracing this time — nobody out there has done a map that makes sense to me!

For these maps, I started with an online hex paper generator, loaded that into my iPad’s drawing app as a background, and used my iPad to draw raw sketch maps while walking around the dungeon exploring and recording what I saw. After I’d finished surveying, I loaded the sketch maps into Photoshop and tidied them up using the line and shapes tools plus some elegant-looking text dingbats for the gates. Then I had to walk around the whole dungeon again to find and fix my mistakes.