I can’t very well start up a new Let’s Play when I’ve already got LPs for FFVII, FFX and Revenant Wings hung up mid-game. In fact, arthritis as well as writing and Life have gotten in the way of my gaming for most of this year. But I’ve been having a rough month, and I wanted some mental thumb-sucking. KABOOOM in games is so cathartic. 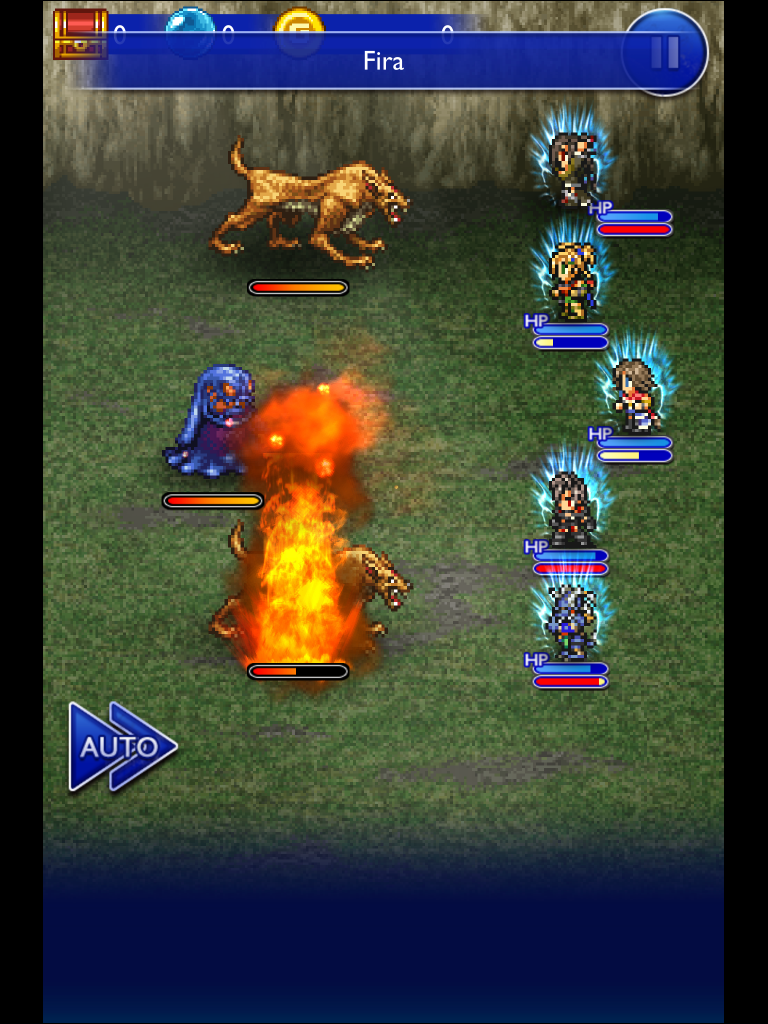 So I downloaded Final Fantasy Record Keeper (it’s free, it’s fanservice). I quikcly discovered that random battles, retro graphics versions of old friends, and glimpses of all the games I’ve shared on this blog since 2013 hit the spot.  It’s very satisfying to drop my favorite characters into different ‘verses, although I have to imagine and interpolate their snark and battle banter. But hey, I did that for my FFI playthrough, and that was a lot of fun, eh?

I’m not gonna write up a Let’s Play of this game, but I’ll share what few tips I’ve figured out at the end of this post.

[NOTE: If you’re playing FFRK already, recruit my Lulu RW with the friend code SuCW. If you haven’t played FFRK before, and want to try it, use my invite code to download it, and you’ll net me a piece of Mythril.]

I was very lucky that a “Go Go Gullwings” event was in progress (it expires in two days!) that let me pick up a half-dozen FFX and X-2 characters almost immediately, giving me a Team Gullwings and Big Blue Kitty party: 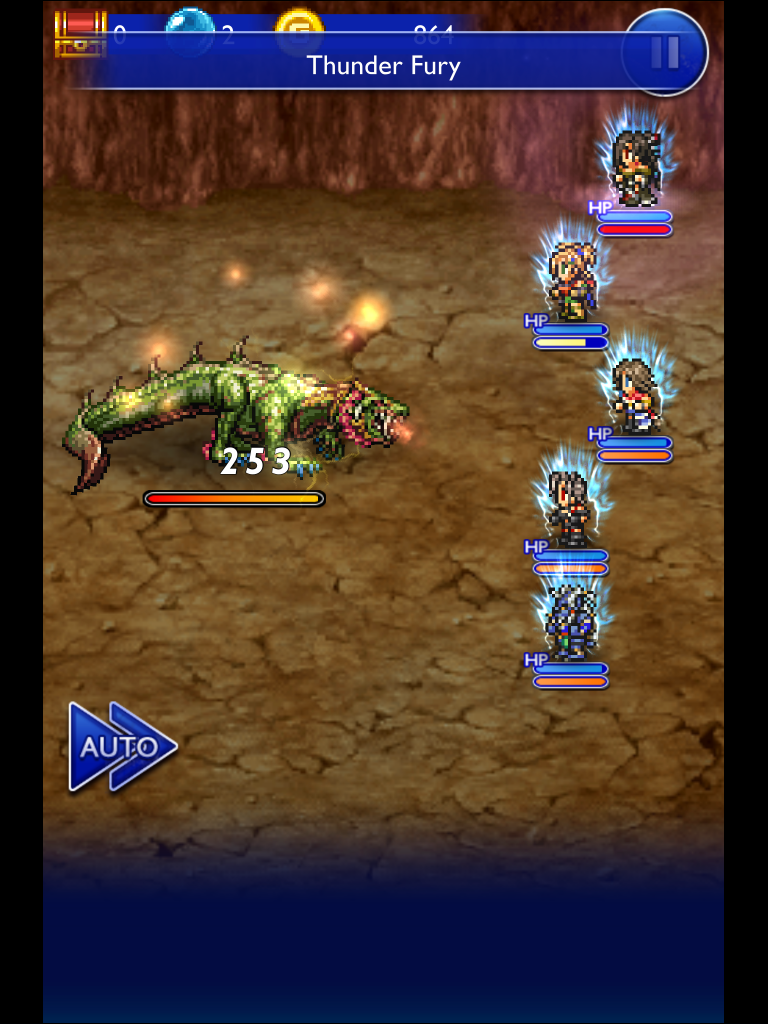 That’s actually the FFX-2 starter dungeon on Besaid where the Gullwings go to hunt down Wakka when he disappears looking for a sphere of his parents. It has the music from FFX-2, including the battle victory theme, which is surreal (but not unpleasant) with mostly FFX characters. Playing this game forcefully reminds me just how great a composer Nobuo Uematsu is; one can have fun bopping from dungeon to dungeon and hearing all his different themes.

The funny thing is that since I played that Event first and picked up Kimahri, I wound up with him fighting himself when I went to the “replay FFX boss battles” dungeon: 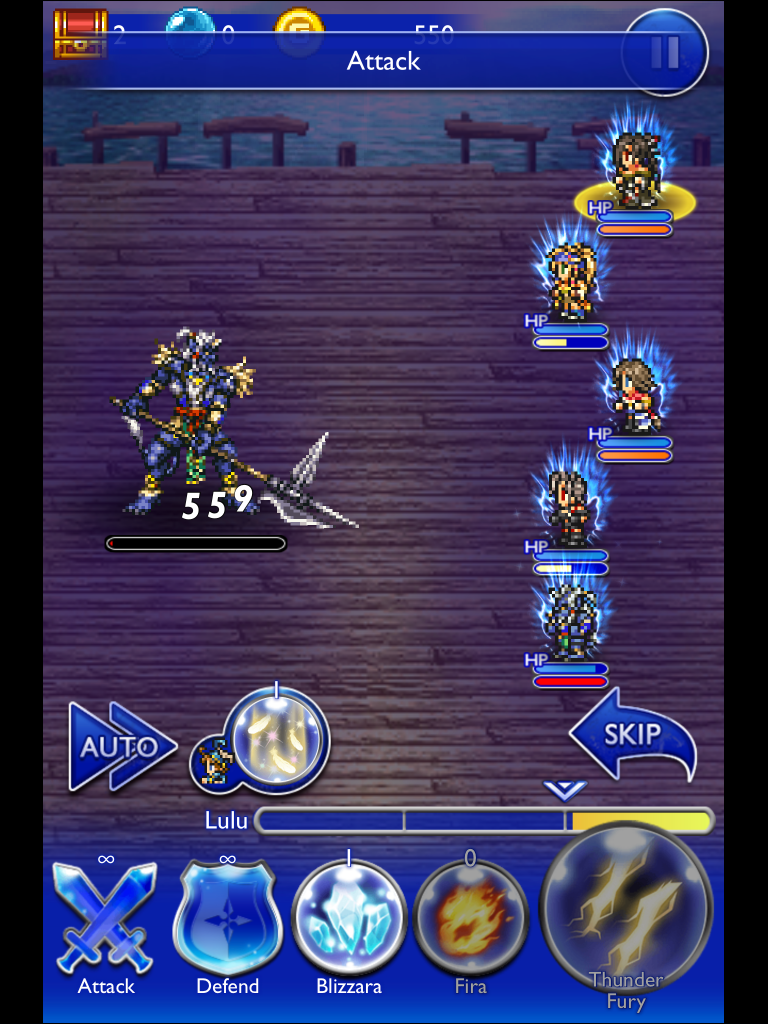 Look, it’s Kimahri vs. mini-Kimahri! “Sometimes we don’t really understand him either.”

You don’t have to have played all the old FFs to fully enjoy Record Keeper, but I’m enjoying all the “oh! I remember you!” nostalgia kicks when I run across a really old monster I’d forgotten from the early games. Oh look, it’s one of those crazy rats from… FFV? I forget, but it’s vintage. 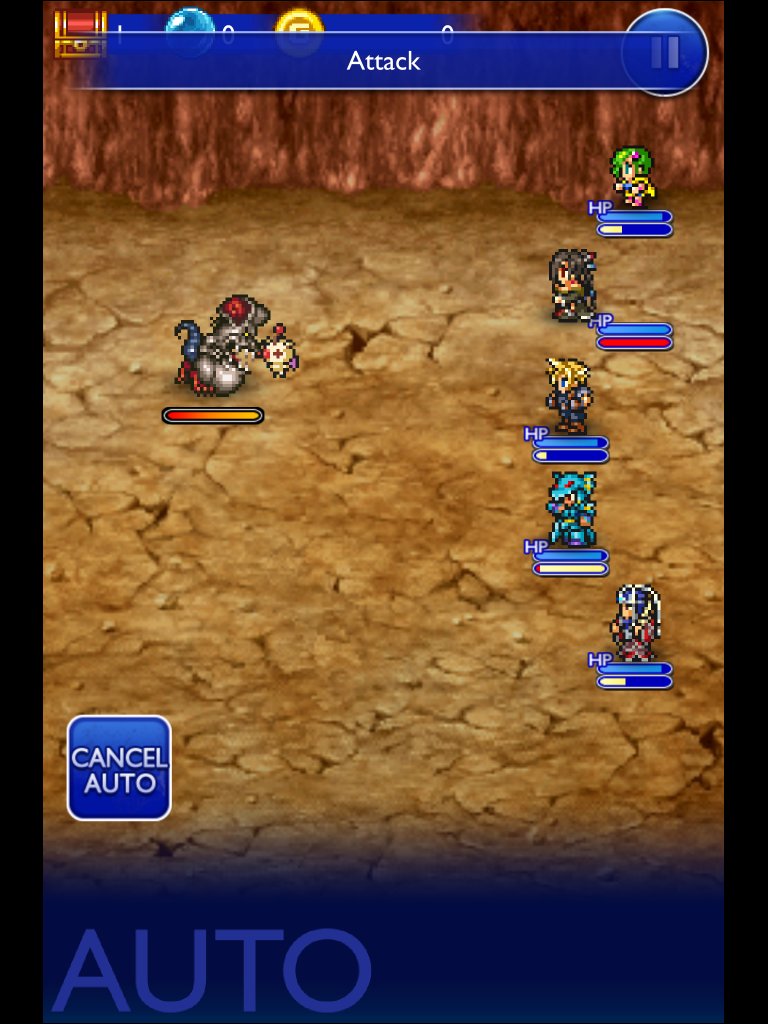 Yes, I’ve picked up at least a few characters from other realms. Paine is such a badass that I haven’t used Cloud much yet.

There was some item I picked up that let me recruit any one character, and I chose Braska thinking he’d probably not show up as soon as Auron does. But no, FFRK is canny; it knows Auron is popular so it’s going to delay his appearance as long as possible! Sneaky sneaky.

I also drew Lulu’s Mog as my first rare relic. It is SWEET. To think, once upon a time I refused to acknowledge her dolls’ existence because I thought they detracted from her cranky badassitude, much like the fanservice outfit. (An essay for another time: intelligent, strong, and blunt female characters in Final Fantasy games are frequently dressed in fanservice outfits or softened in some other manner to make them less intimidating to guys.)

But I’m straying from my point. Here’s Mog, seen bashing the rat on the nose in the above screencap. 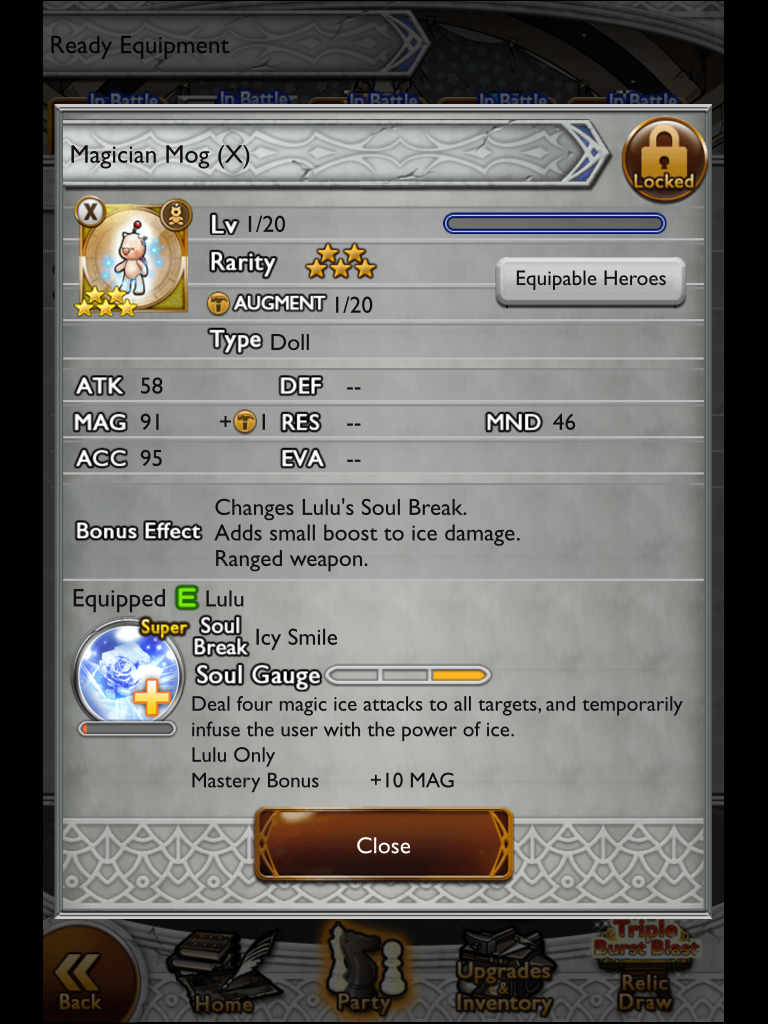 And here’s an example of the “Icy Smile” Soul Break. Resistent or no, these puppies went down hard, and the damage was still several thousand HP x4 on every target. 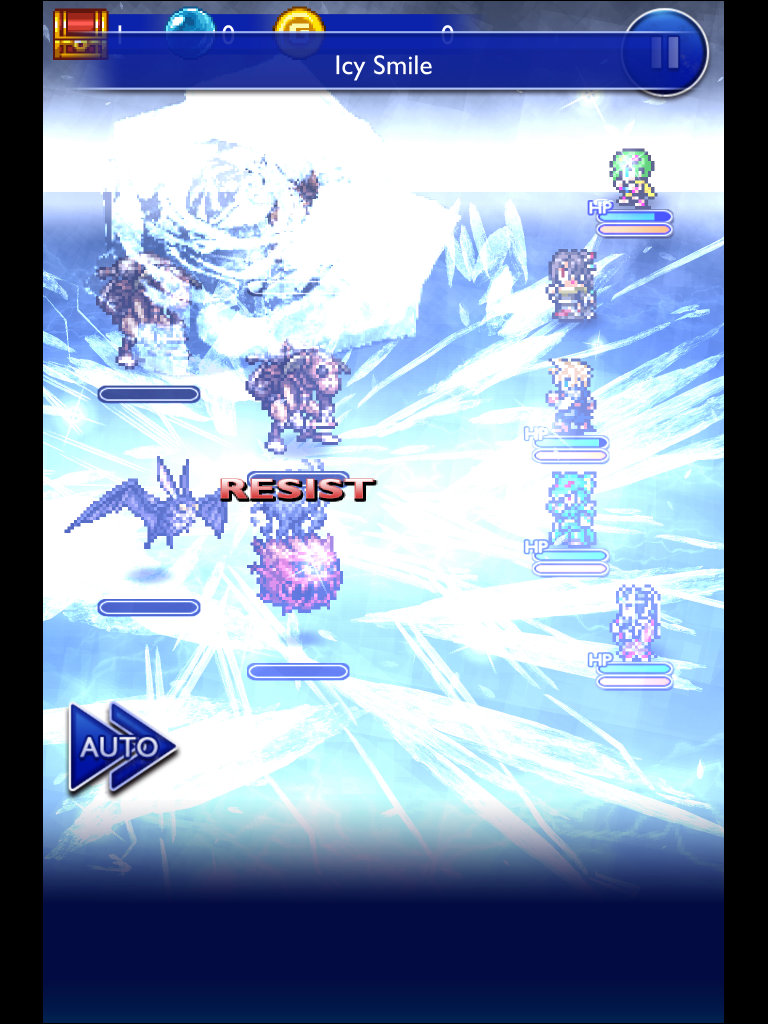 For a video of this Soul Break, see my 5-minute demo of Team Gullwings & kitty powering through a Spectral Keeper type boss in the FFX-2 Zanarkand Ruins.

My meagre store of Final Fantasy Record Keeper Tips after playing all of 2 days:

And now hopefully my stamina has recharged enough I can go back into…where was I? Oh, right, FFXI: Maze of Shakhrami.