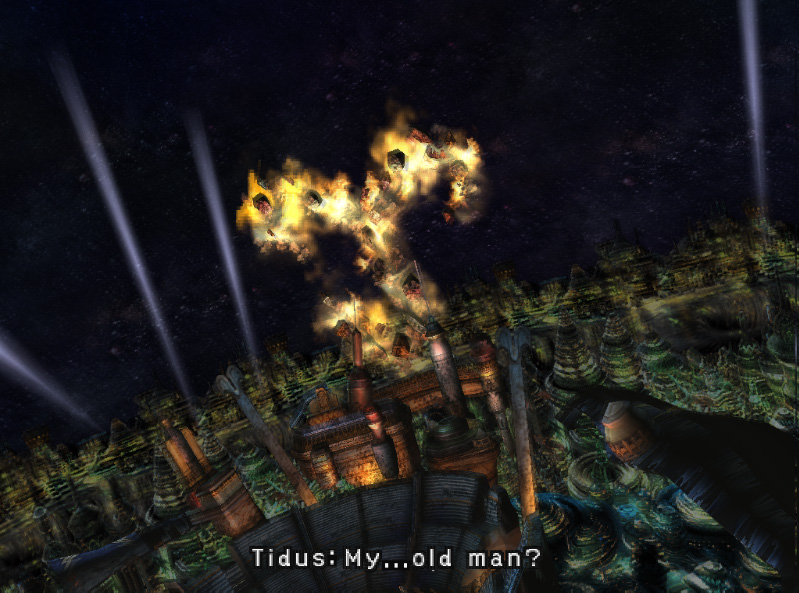 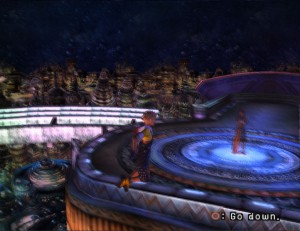 First sight of his father in ten years. After he just lost his entire city and all his friends. Ever had days like this?

I think it’s Jecht’s. He’s carved out a little pocket of dreamspace where he can hang onto his last slivers of self-identity against Yu Yevon’s mind control. He’s surrounded by disjointed fragments of his own memories.

So, why isn’t this Tidus’ Zanarkand, which Sin just trashed?

Remember, we just saw Tidus pulled out of that city and into Sin. Sin’s interior seems to be modeled by pyreflies acting on the memories of Jecht and the inhuman thoughts of Yu Yevon. Pyreflies are all-purpose plot device particles that can manifest feelings, dreams and memories in material forms such as aeons, unsent, fiends, or 3D holograms. In other words, they convert spirit into reality.

So this is Jecht’s private reality. 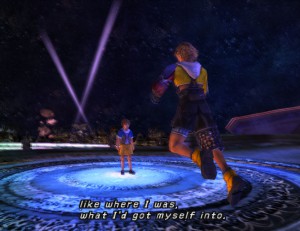 Inside Sin’s pyrefly-sculpted dreamworld, Tidus comes face to face…with himself. Thanks, Dad.

A soon as Tidus draws near, the ghostly image of Jecht mutates into Tidus’ childhood self. More nightmare fodder for the boy. Is that Jecht’s mental image of his son, or Tidus’ own fears, or both? Either way, Jecht’s dreamscapes never acknowledge that Tidus has grown.

Flashback!Tidus narrates that by this time he wanted to see someone, anyone. Besides Dad, presumably. 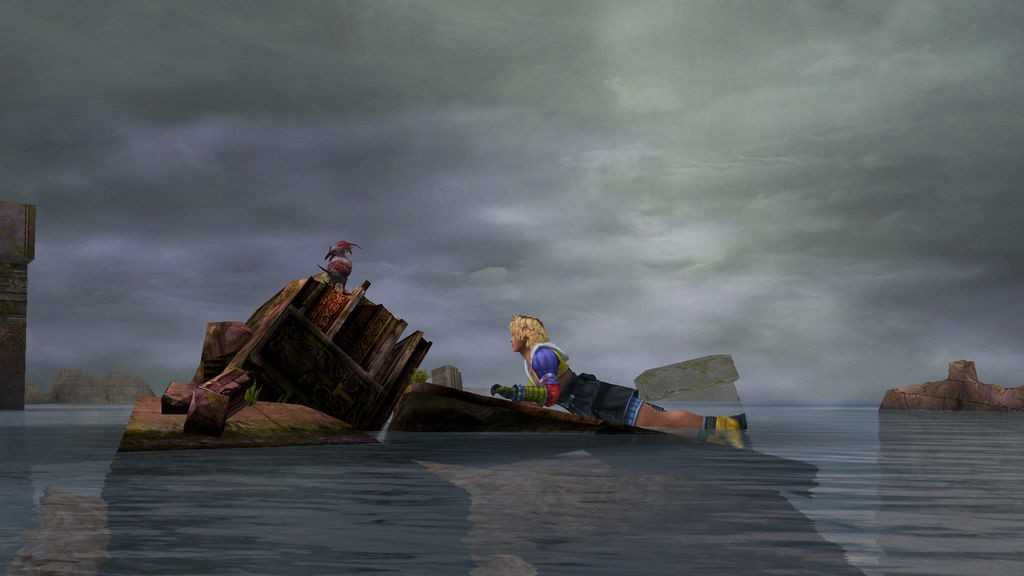 Sin, who seems to sense and respond to Tidus’ yearnings, tries to help by dropping him near the one group of people who are unlikely to jail him as a drunken heretic. Luckily for the structural integrity of their ship, if not for Tidus, Sin misses and strands him in the middle of nowhere.

Tidus wakes up cold, alone and bedraggled on a pile of rubble. The only “somebody” in sight is an unfriendly-looking red bird preening its feathers. 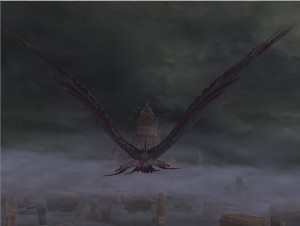 Brightened up a bit in Photoshop to show details.

Tidus does not want to think about seeing Dad. Nope. Uh-uh. Instead, he starts yelling for Auron. The bird, affronted by his yammering, flaps off towards an ominous ruined tower surrounded by thunderheads and evil-looking birds swirling like bats.

I love Baaj. Evocative setting, spooky ambiance, sunken city. (One thing we never witness: Sin has the power to sink whole islands, presumably using its can of gravity magic whupass with which it was vacuuming up Zanarkand). Later in the game, we’ll learn that Baaj was the prison where young Seymour and his mother were banished by Jyscal. 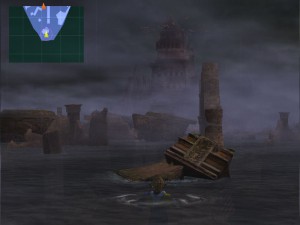 Time to swim, something that was pretty uncommon outside of Tomb Raider when FFX came out. First thing I do is turn off the minimap so I can enjoy the scenery. A pity the remaster didn’t add camera control, but I suppose FFX’s game environments were designed with fixed-camera, rather like a stage backdrop, so they’d look weird if we could walk “backstage.”

An Al Bhed Compilation Sphere on the left gets us started on a sidequest:

Back to Baaj. The ruins on the right have an obscure Al Bhed Cipher clue for Kimahri’s Celestial Weapon:

In the land where bolts of light
illuminate the blackest night
With Macalania behind
the fourth pillar you sight
look not on the left
but on the right.

Yeah, I used a walkthrough too.

Onward. The HD Remaster may do weird things to people’s faces, but once again the details of the architecture are gorgeous— be sure to admire that archway I can’t screencap in my PS2 emulator when Tidus first climbs out of the water.

He then climbs a totally safe-looking stone path which must’ve been a rib of the domed ceiling over the old temple’s great hall. It collapses, he falls again (I think this would be the third time he’s fallen in the past half hour?), and he has a brief moment to paddle around before he’s ambushed by fishies. HOLY UPGRADED BATTLE MUSIC BATMAN!

Playing all the earlier FFs has added a charming note of nostalgia to FFX: Sahagin again? I remember you guys all the way back in FFI! Let’s boogie.

Slight game goof: it’s hard to spot unless you look off into the water while Tidus is opening the Hi-Potion treasure chest before he falls in, but in the HD master you can see three Summoner Statues in the sunken temple (plus broken-off-statues of Yunalesca and Zaon above): 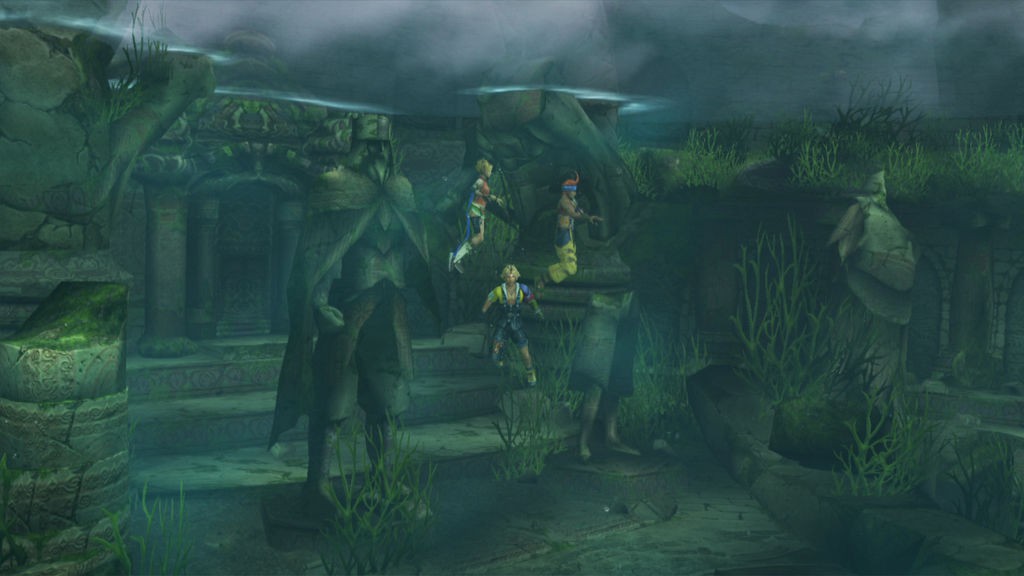 That’s High Summoner Ohalland on the left, then Lady Yocun’s legs, and then… heeey, is that the human artichoke on the right? 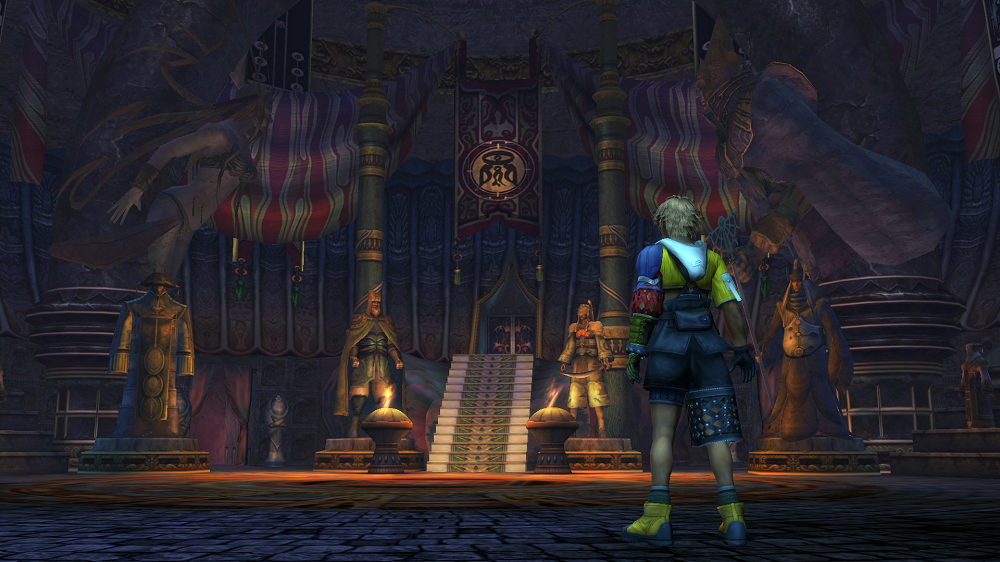 Whoops. So, the church of Yevon (or Seymour) funded a Braska-statue for Baaj, but not Besaid? Bastards.

Sorry, Tidus, I’m sightseeing while an anatomically-improbable fish monster is punching (!) you. How kind of it and the Sahagin to break off mid-battle just before he needs a Potion. Cutscene squirts (ew!) Tidus into the temple and conveniently blocks the outlet. So now, just to continue his rotten day, he’s stuck in a dank drippy temple. 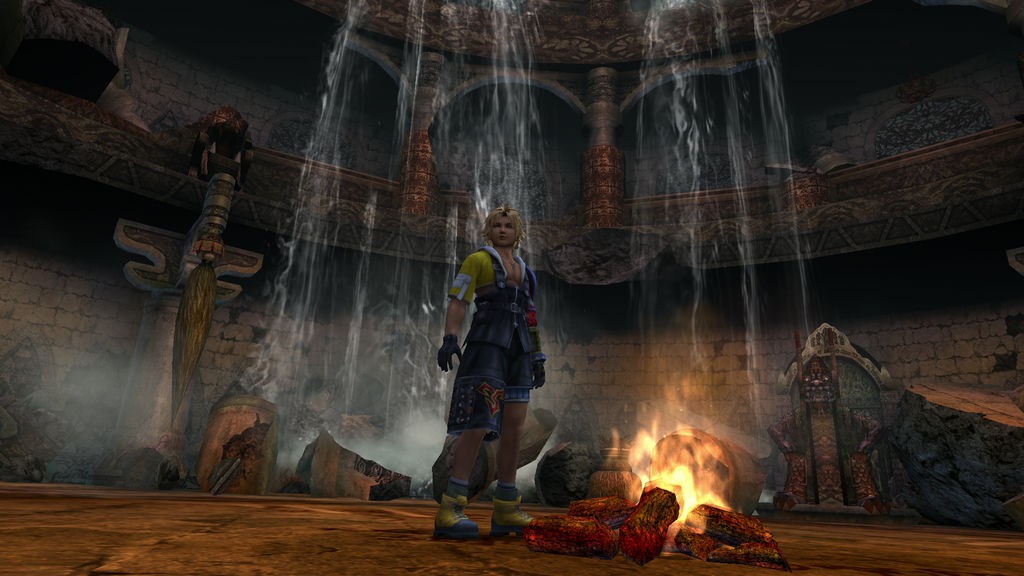 Inside Baaj Temple’s main hall. Notice dragonish statue in the back at right. (From FFWikia)

I like the strange idols in Baaj, which Mintywolf cleverly identified as Okinawan Shisa statues. (The southern islands of Spira, especially Besaid, are loosely modeled on Okinawa). The style of these idols makes me think they’re part of some older, nature-spirit religion from before Yevon took over.

There’s a lot of Spiran Script scrawled on the floors in Baaj. I hoped one of them would give us the name of Seymour’s Mum, but no, she’s a card-carrying member of the Final Fantasy Dead Mothers Society, and they don’t get nametags. Instead, rather pathetically, bitty!Seymour seems to have written “Jyscal Guado” and “Guadosalam” all over the place, despite the fact that both had rejected and banished him to this benighted island. 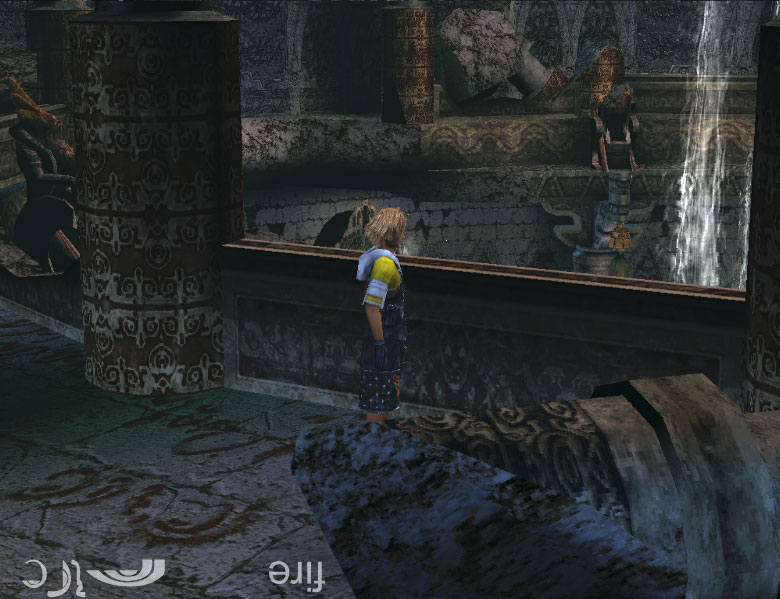 “Fire” on the upper story and something else I can’t make out. 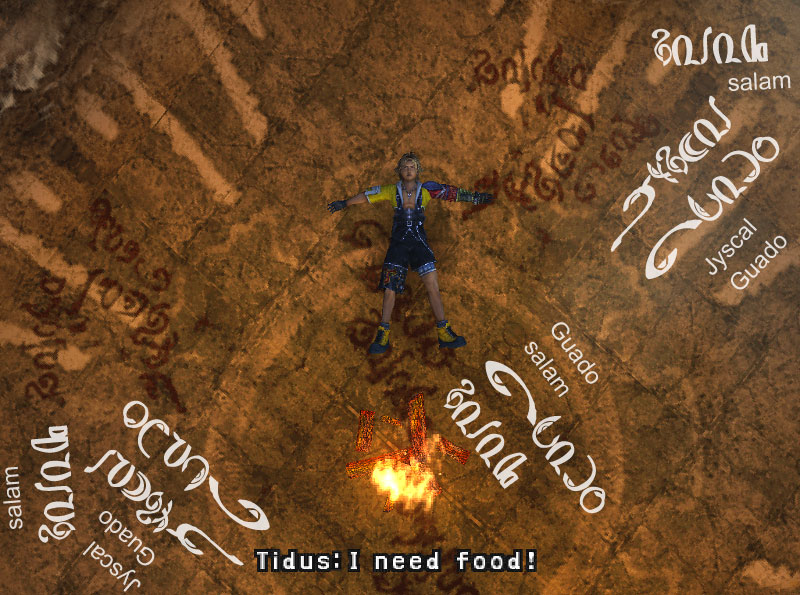 Floor graffiti, Baaj Temple Great Hall. I’ve boosted exposure on all of these to bring out the letters. 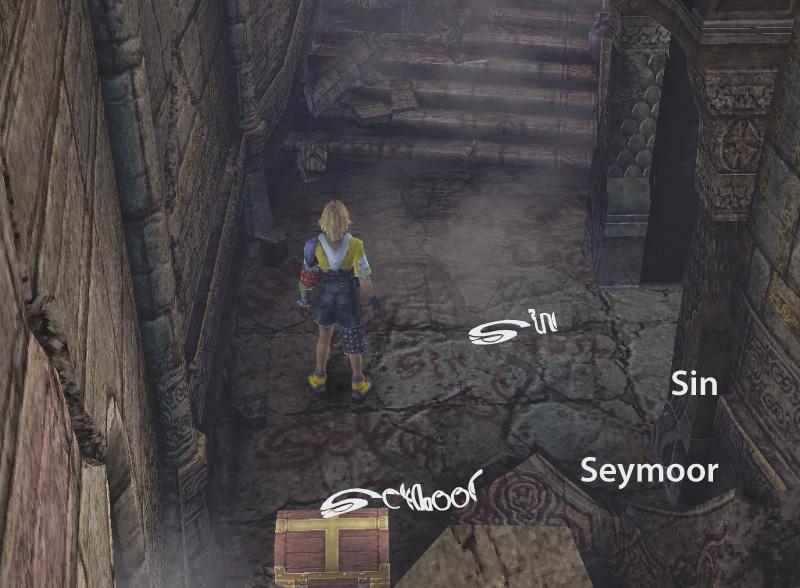 “Sin” and “Seymour” (brightened considerably) in hall with withered bouquet. 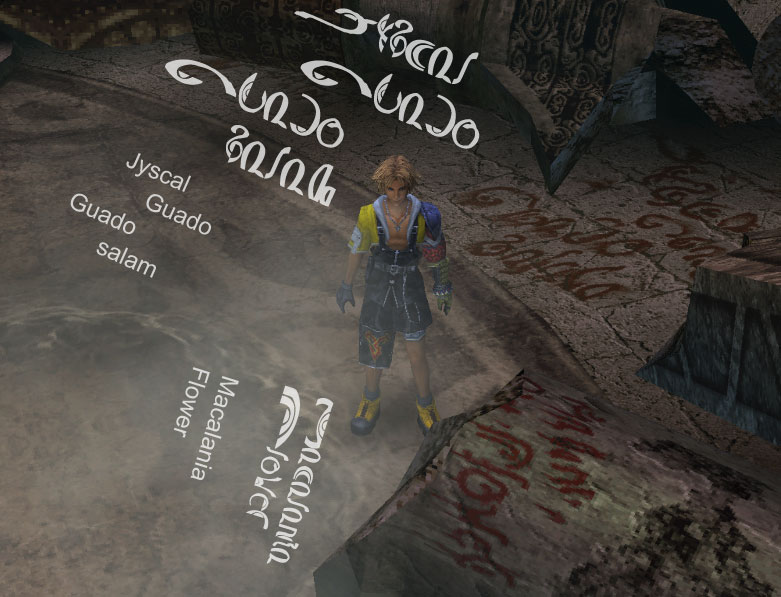 Again, brightened up to show details. Could Seymour’s mother be from Macalania? He does become Macalania’s high priest when he returns.

Since “fire” is scrawled in several places, I wondered if “flower” was a clue to the “withered bouquet.” Minty says we’re overthinking this, and half-jokingly suggests that Seymour!Mum’s name is “Flower,” as in the skunk. That actually makes a certain amount of sense (well, not the skunk part, but that he’d write both parents’ names). Maybe Seymour’s mother came from Macalania, which would explain how Jyscal came to meet her and why they accepted Seymour as High Priest?

Speaking of black magic, Tidus creates fire with flint and tinder but no steel. This always bugged me. And now he’s hungry again, because he’s a teenager. Time for another dream sequence to play cruel tricks on him. If his day weren’t lousy enough already, Auron and Creepy!Kid start ragging on him for losing a game.

In the original Japanese, instead of “It’s been… ten years,” Auron says, “Today is… the anniversary of her death.” That is why he says, “I thought you would be crying.” Not just because Tidus lost the game, but because of his mother! 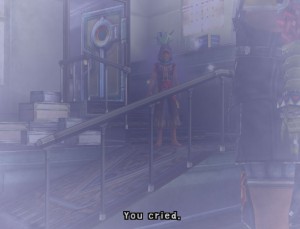 Thanks SO much for the helpful pep talk.

It’s interesting that Tidus can dream, although he seems familiar enough with the concept that he must have done so before. From the moment he enters Spira, he starts having to forge a new identity for himself, come to grips with feelings and insecurities. It’s unclear exactly how alive and autonomous he was before, and how much he was a simulation of a person in the fayths’ dreams, like… well, like a video game character. I think moments of self-angst and self-realization in Spira help him become “a real boy.”

When he wakes up after an all-too-brief nap, a big ugly scorpion bug thing attacks him. I nearly lose Tidus to my own stupidity because I forgot to save. Hey, I like a challenge.

Next up: Rikku’s painful camel toe and Brother’s interpretive dance.