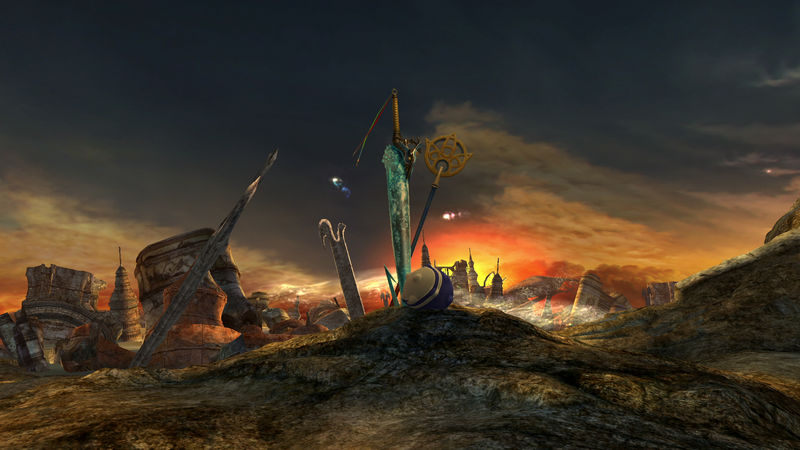 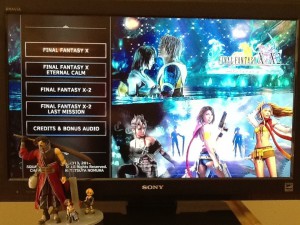 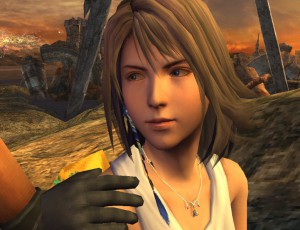 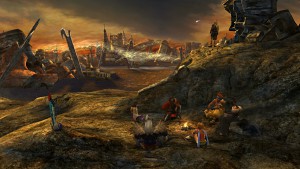 Oh look, this game is going to be horribly angsty, imagine that! (Ganked from FFWikia)

The first time I saw FFX’s opening, I thought the party must be survivors of an atomic holocaust. That wasn’t entirely wrong. It’s just that the war had happened ages ago, and they’re dealing with the repercussions only indirectly.

WARNING: THIS PLAYTHROUGH WILL HAVE MUCHO SPOILERS. STARTING NOW.

Tidus gazes out at ruined landmarks which he probably recognizes. Then he launches into the most extended flashback sequence in any video game: Listen to my story. This may be our last chance. (Presumably he rejoined his friends to begin his monologue rather than telling it to the pyreflies). 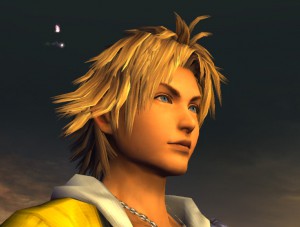 Note italics. A large chunk of Final Fantasy X is “his story,” i.e. a narrated flashback. Tidus, the Velveteen Rabbit, wants to reminisce about their adventures, which are in a sense his entire life. Also, for some party members, campfire storytime serves as a  send-off for Yuna. 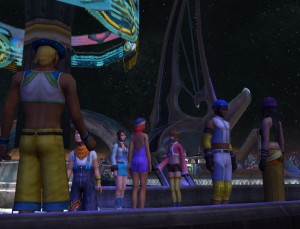 The life he had before: hordes of fans on his doorstep, screaming if he so much as took out the recycling.

Then— cognitive dissonance! — we’re thrown back into a very different view of that same city, not ruined but vibrant and neon and full of night life. Since Tidus’ houseboat is on the outskirts of the city at the end of a long causeway, it’s possible that we’ve gone back a thousand years to the same location (only not quite, because nothing is ever simple in this game). Instead of spooky pyreflies, Tidus’ Zanarkand is full of ordinary, superficial people like us. 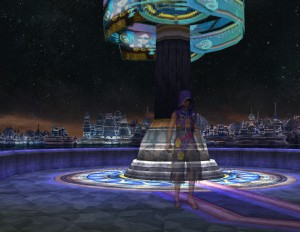 To punctuate the fact that This Place Is Totally Happy, a fun, techno version of the Final Fantasy Prelude theme plays (which I didn’t recognize, having started with FFVIII). After the crowd of fans goes squeeing off in pursuit of their fancrush, a blue-hooded Creepy!Kid ghosts in, our first hint that all is not as it seems. Before we have time to digest his intrusion, we’re treated to our galumphing jock hero with his giant yellow feet. 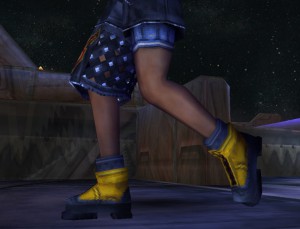 The hero is here! Or at least his doofy shoes are.

Let’s get it out of the way: for me, Tidus is like an overenthusiastic big yellow dog, good-hearted but blundering into everything. I find his doofiness more endearing than exasperating. He’s 17, okay? Luke Skywalker was whinier at age 21, and his father was less of an embarrassment.

I stick with Tidus’ default name, although I’m sorely tempted to use “Muffins” again in homage to Mintywolf’s entertaining walkthrough starring “Waffles.” 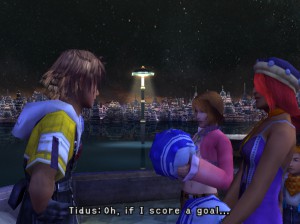 Enjoy it while you can, Mr. Star Player.

So apparently it’s perfectly normal in Zanarkand for fans to stake out a celebrity’s house and bug him when he’s trying to get to work. Don’t they have a game to watch?

While fans hail him as “ace” and compare him to his father (again, and again, and again), Tidus is fairly modest on his home turf. He doesn’t boast, apart from a cocky “no problem!” He says that if he scores, he’ll dedicate the goal to these fans. He even asks for their seats so he’ll know which way to face when he salutes. How very medieval-knight of him. (After winning a joust, always salute the lady whose favor you bear.)

“Fifth from the right!” adds UFO-hat, which is a fantastic look.

When the trio of kids beg him to “teach [them] how to blitz!” he agrees to give them free lessons, exactly not like his Dad.  However, Creepy!Kid pipes up to say Tidus “can’t tonight” because a plot device is due to eat him before the halftime buzzer. Tidus, whose life is literally a dream, doesn’t notice there’s a weird little dude with a Wheel of Karma on his back (check out this spiffy cosplayer) ordering him about. 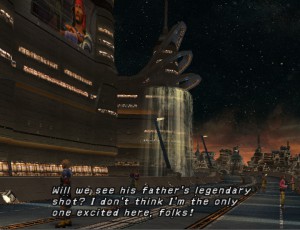 Overshadowed by Dad. As usual.

Then it’s off to the stadium along a car-free elevated highway (shades of Esthar), with a sports broadcaster hyping the upcoming “Jecht Memorial Cup.” I’m a goober and have to slow down to listen to this entire “Zanar” speech,  because it must be Matt McKenzie/Auron speaking despite lack of voice credit. Exposition!Broadcaster explains that Tidus’ dad Jecht “vanished into thin air” ten years ago, which sounds more glamorous than “drowned at sea.”

Tidus snorts at Jecht’s billboard and mingles with more fans on the way to the stadium. Somehow he manages not to punch all the people calling him “Jecht Junior” or begging him to perform a Jecht Shot. (Even in Zanarkand, he can’t get people to call him by his real name, apart from two of the “Teach us how to blitz!” children.)

Things that the remaster did not make more clear (With apologies for my lack of drawing skills): 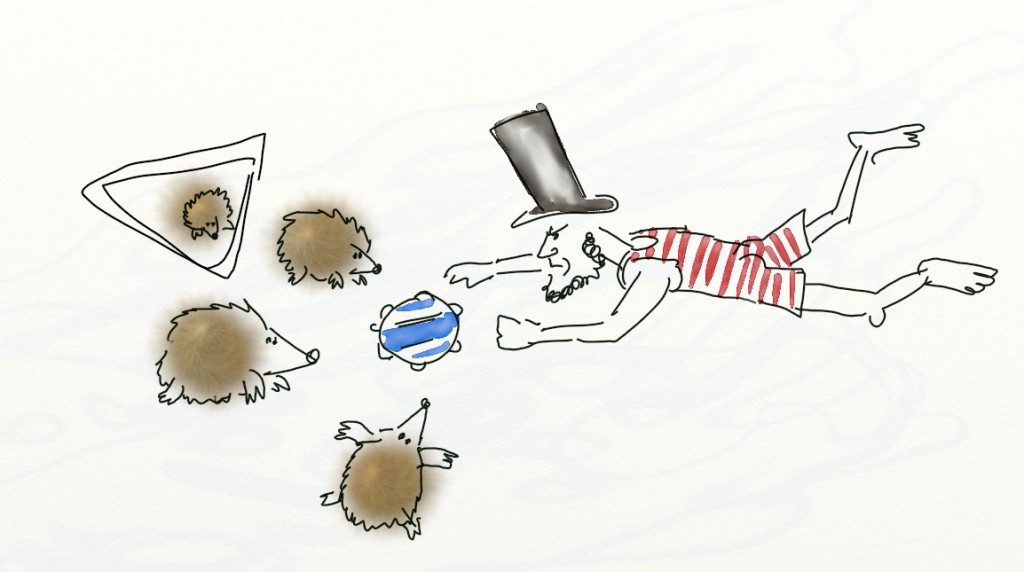 “Zanarkand Abes” vs. the “Duggles“?

…no, I don’t understand either.

While traversing the causeway, look for a girl in pink begging for a ticket. If Tidus gives her one, she’ll spot him some potions. Also, his fans fall over themselves to feed him; he receives two different dinner invitations from a bloke and some kids who say their Mom is a fan. No wonder he keeps begging for food when he gets to Spira; he’s never had to scrounge before.

Along the way, the Foreshadowing Fairy swoops in to make a few NPCs feel queasy and uneasy. Sin’s toxin must extend far ahead of it like the leading tendrils of an approaching hurricane.

Things to note: the bolts reflected in Tidus’ eyes as he comes down, the awesome Duggle he boots out of the pool, GRAVIJA pulling the city up (or some sort of gravity-magic, Sin’s specialty), and of course Auron saluting the sentient tsunami with his jug and strolling through the devastation as if he summoned the damn thing. My Mom was convinced Auron was the villain (which would make a fun AU). Probably a deliberate red herring. 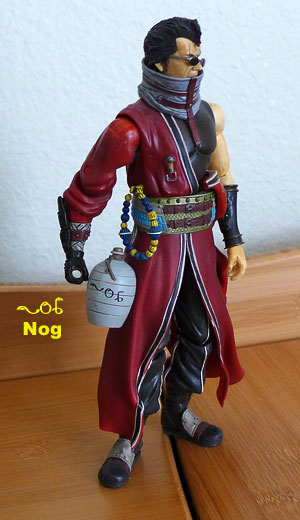 My Auron action figure. (“Nog” is legible in the remaster)

For your inner geek, Auron does not, in fact, drink sake. His jug says “Nog” on it in Spiran Script, i.e. the same ale that goes in eggnog. Surprisingly, the writing system in Zanarkand is the same Spiran Script used in the rest of the game. However, it’s all gibberish apart from the scoreboard which has the names of the teams, the name of the Duggles player whom Tidus booted (Judy), “Jecht Cup” at the top, sponsor names, and a Squaresoft logo (cut off in the HD version, whoops). 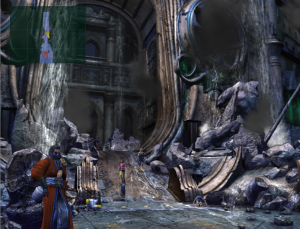 “I was waiting for you. Come on, we have a space whale to catch.”

So Tidus falls but does not die because Screw Physics, and we get the first of many great Auron deadpans. (“Auron! What are you doing here?!” “I was waiting for you.”) The happy-go-lucky city we saw five minutes ago has been reduced to rubble, pandemonium, and screaming people running every which way. FFX loves hammering us with 180-degree mood swings.

I love the remastered “RUN!” track for this sequence. As Tidus attempts to catch up with Sir Grumpypants, who is leading him towards whatever eldritch horror everybody else is running away from, the whole world abruptly freeze-frames in a holodeck glitch, apart from Creepy!Kid. 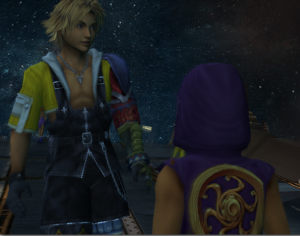 When someone with a wheel of karma on their back says ‘It begins,’ you’re probably in trouble.

“It begins,” he says. Tidus makes confused noises, his default state for the first half of the game. CK answers, “Don’t cry.” Uh. Tidus isn’t crying. He’s just trying to figure out what the hell’s going on, and you’re not helping.

Auron isn’t much help either. “We called it Sin,” he explains calmly, after Tidus catches sight of the scary water sphere Auron’s dragged him all this way to see.

Auron pulls not one but two ginormous swords out of his *cough* inventory. Yes, we can all laugh at the fact that Tidus drops his father’s sword as soon as Auron lets go of it. Cloud, this boy isn’t, but that’s the point: Tidus is the most ordinary FF protagonist to date, with even less pregame combat experience than the “Onion Kids” of FFIII. He’ll need training. Auron starts him on surprisingly pretty “fiends” with glowy bits. These things must’ve mutated and populated most of FFXIII.

I never get tired of Auron’s resounding swing-THWACK. [Tangent: waaaay back in ’06, I had friends over who had never seen FF. “Oh,” said old-school male gamer smugly. “This is the part where the character waves a sword, and it magically hits the monster 10 feet away.” On cue, Auron charged forward, THWACK, slew a Malboro. Overkills are a girl’s best friend.]

Auron’s Dragonfang Overdrive should be a warning to Tidus that not only does he never explain things and run straight into danger, he also likes explosions. For his next trick, Auron orders Tidus to attack a gas tanker which apparently fell from the sky, since it’s crashed onto a pedestrian walkway. (The Spiran writing on the tanker says “oil”). KABOOM. Building-demolishing explosion. Auron didn’t like Zanarkand much, did he? 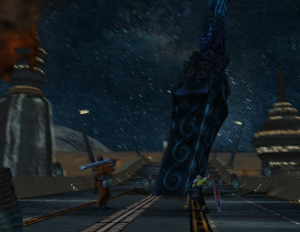 FFX drinking game: take a swig whenever you see something decorated with spirals.

Our action heroes leap the flaming gap in slow-mo. Of course, Tidus doesn’t quite make it and dangles helplessly. Meanwhile, Auron confers with Space Whale. “Are you sure?” he says. Hang on. What did Auron drag Tidus to Sin for, if not to take him back to Spira? Family reunion? Human sacrifice?

“This is it. This is your story. It all begins here,” Auron says to Tidus, concluding the prologue that started with “Listen to my story.”

Then he picks him up by the collar (go Auron!) and lobs the boy into Sin’s pulsating sphincter. Thanks so much, Auron.

(The original Japanese said something like: “Your fate is sealed. This is your story. And yours alone.” )

This opening is so epic we don’t notice the narrative sleight-of-hand. For all that Zanarkand has gravity-defying water physics, it’s a modern, technological city with radio broadcasts, sports stadiums, people and fans like us. Tidus is being pulled out of that relatively “muggle”  modern world into a medieval (Japanese!) fantasy world. We make that journey along with him.