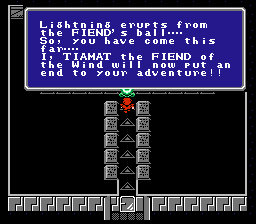 Preparing for the end of their epic journey, the Four Warriors of Light return to Crescent Lake, home of Lukahn and his eleven sages. What words of wisdom will they have for us, now that the Four Crystals have been restored?

“I am Lukahn,” intones the sage… 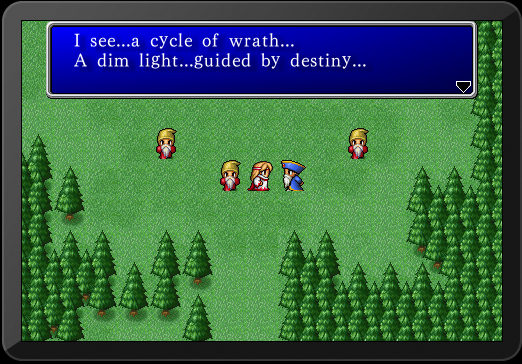 Rei: That’s what you said last time! Look, Mr. bigass-orifice —
Nina: ORACLE.
Rei: Whatever. Look, Lukahn, it was your stupid prophecy that sent us on this quest, and it’s about time you told us—
Nina: Rei, forget it. The CEO never knows anything. It was one of the other sages who told us to come back when we had restored the crystals.
Momo: Er…which one? Exposition Dudes all look alike.
Spoo: …

We check with the other Sages… 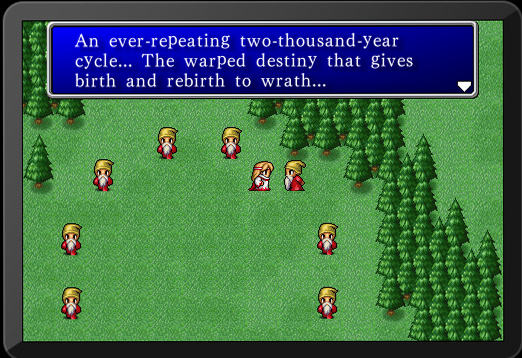 Rei: Haven’t I heard this somewhere before?
Nina: Or since.
Momo: Magitek, Machina…dang this deja vu.
Spoo: …

They all say variations of… 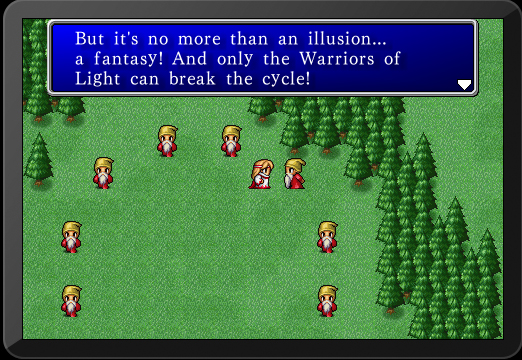 Spoo: Now! Now is the time! Die and be free of pain, or live and fight your sorrow! Your fate is in your hands!
Rei: *stares*
Nina: *stares*
Momo: *stares*
Rei: *taps forehead* Must’ve been something in that bottled fairy water we drank. So anyway, how much are these guys paying us? 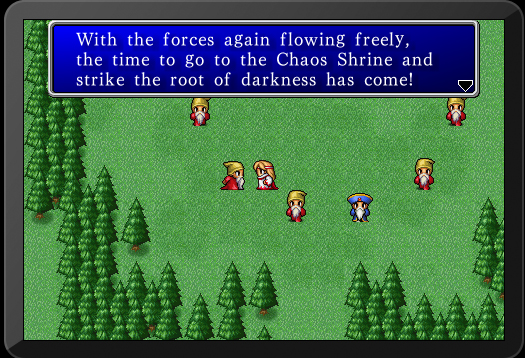 Rei: Okay, THAT I get. Why couldn’t one of you Exposition Dudes have said that in the first place?
Nina: So, let’s make sure we’ve got this backstory straight. *checks Exposition Dude notes* Four hundred years ago, the Fiends started attacking the Crystals, because of something triggered a few days ago, but now the perpetrator’s traveled back a thousand…er…two thousand years ago, and it’s our job to go back two thousand years and defeat him/her/it to break the cycle…?
Momo: Forget the backstory; let’s go blow something up.
Spoo: *buckles swash*

So we return to “X marks the spot,” the dungeon of our first exploits, where Garland, Princess Sarah’s kidnapper, tried to knock us down. 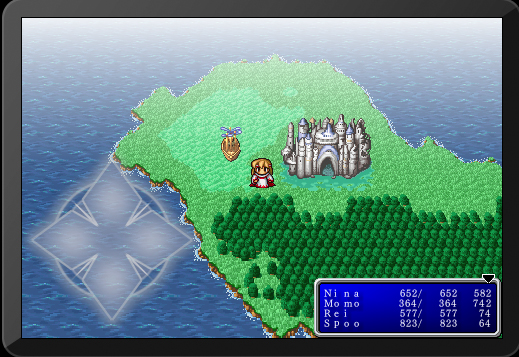 Rei: This had better be worth it.
Nina: If the forces of chaos expunge all the mermaids, bikini babes, and gil from the world, would that be worth it?
Rei: Point.
Momo: Let’s just THUNDAGA this station and go home!
Spoo: *polishes shiny sword*

Inside the Shrine of Chaos, a mysterious stranger appears… 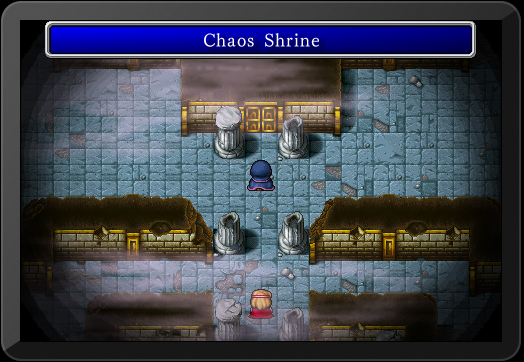 Rei: Purplish-black cloak, standard issue from the PSX Shady Character Wardrobe, and he darts off when we lay eyes on him… no, I’m not suspicious at ALL.
Nina: Hey, you’re right, Rei! I think he slithered offscreen at the beginning of the game when we entered our first town. Let’s follow!
Momo: The REAL BIG BAD BEHIND THE BIG BADS! There’s always one in these games!
Spoo: *prepares for smiting*

We follow him through a “miasma” into the “Labyrinth of Time” 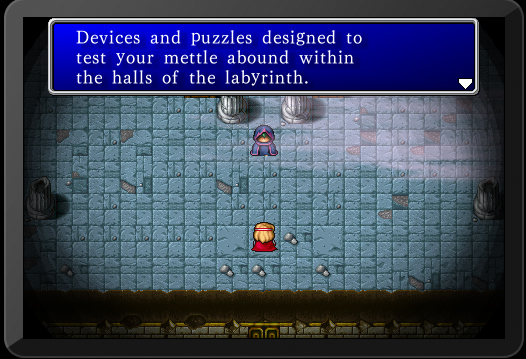 Rei: Waaait. Puzzles? That drain us of our abilities? I’m not liking the sound of this.
Nina: Oh, no! It’s another bonus dungeon! He’s the one behind them!
Momo: RUN AWAY, RUN AWAY!
Rei: Uh, I think we should get back to saving the world. Seriously.
Nina: Agreed. There are some perils that even Warriors of Light must flee.
Spoo: *wants to destroy architect of bonus dungeons, but is overruled*

Inside Garland’s room with the dark crystal, Nina makes a poignant discovery… 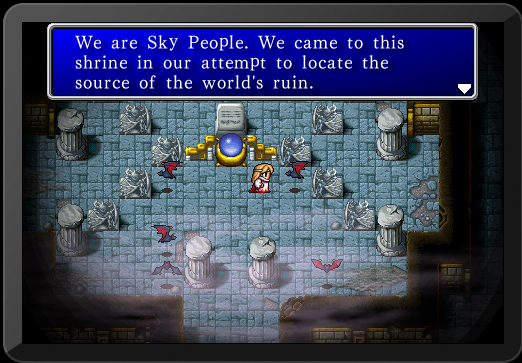 Nina: THE KEE BATS TALK!
Rei: Uh…does that mean that we’re going to turn into Kee Bats? Count me out!
Momo: Wings would be pretty spiff, though.
Spoo: … 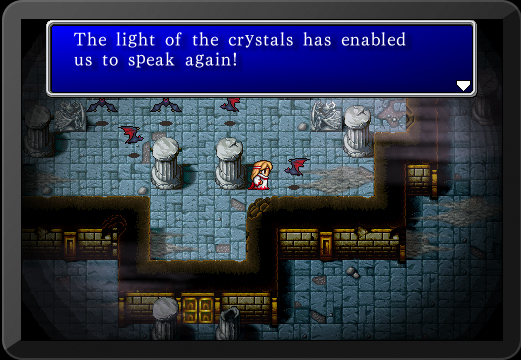 Rei: Aha. Plot device; be sure to wash in cold water on “delicate” setting.
Nina: REI.
Momo: So, enough playing with bats. Where’s this time machine we’re looking for?
Spoo: …

The Kee Bats quickly put us on the right track… 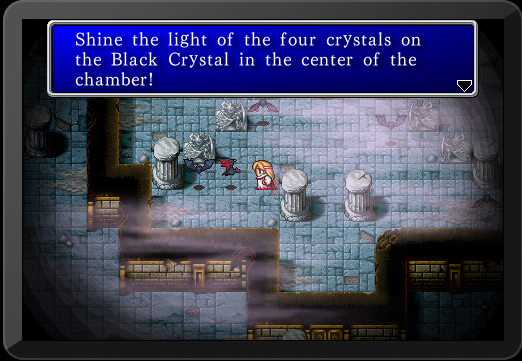 Flanked by noble Kee Bats, we set forth to battle the forces of Entropy… 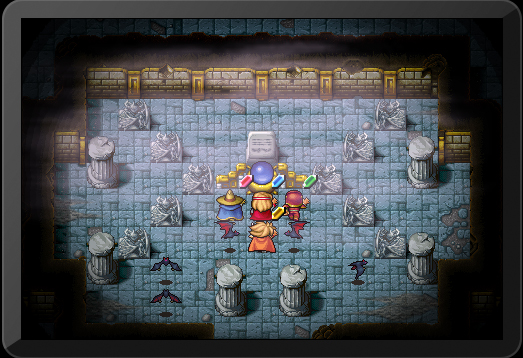 Spoo: *FOR THE PRINCE!*
Nina: For the Kee Bats!
Momo: For Saint Cid!
Rei: For cash considerations! 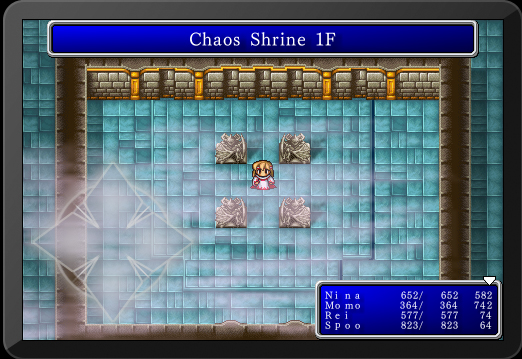 Rei: Punch it, Uematsu! Yeah, that’s what I’m talkin’ about. (NES | iOS Remix)
Nina: Let’s be cautious, everyone. There’s no telling what dangers–
Momo: YOOO HOOOO! CHAOS FIENDS! COME OUT, COME OUT, WHEREVER YOU ARE! *raps four fiend statues with wizzy staff*
Spoo: *forgot to go before we left*

Wandering through the maze, we trip over a familiar-looking boss… 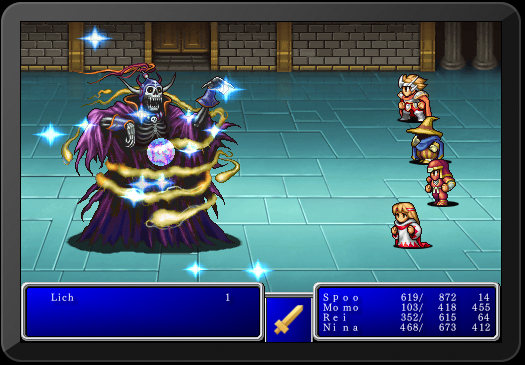 Rei: Hey, no fair! You just leapt out on us! At least give us a gloaty taunt, first, if you’re not gonna plop a sprite on the dungeon map to show us a boss battle’s just ahead!
Nina: *Mutters obscure magical incantation* Holy holy holy, R5 to Paoli…
Momo: Uh, Nina, I’m not even sure is gonna get that joke.
Spoo: *applies thorough thrashing*

On the next floor, the boss redux continues… 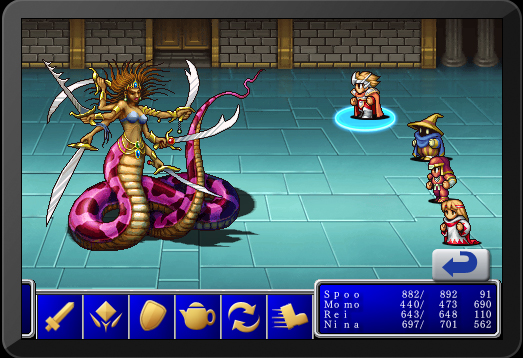 Rei: Bringing back an undead boss is one thing, but I know we killed this babe already. Not that I mind seeing her again.
Nina: Less talking, more smiting.
Momo: I really dig the purple cow spots, though.
Spoo: *applies more smiting* 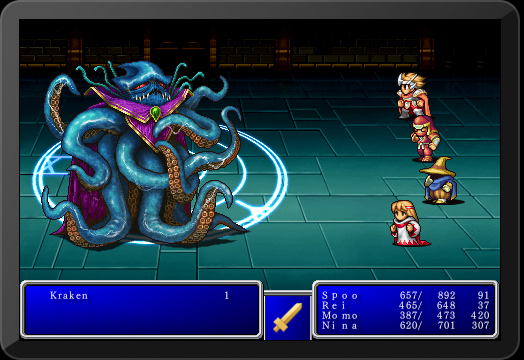 Rei: So they all used the time portal to come back here? Or did we kill them twice? Or…?
Nina: Cut the Fridge Logic, Rei, and kill it!
Momo: Noooo! Never, ever link to TV Tropes in any post you want your audience to finish reading! It’s the first law of online fandom! They’ll go away and get sucked into a singularity of geekery and wake up 6 hours later wondering what happened!
Spoo: *applies more poking* 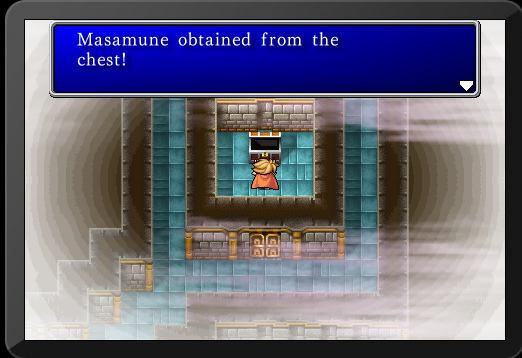 Rei: DUDE! I get a shiny sword now? The game’s almost over!
Nina: Hey, you’ve been doing pretty well with that Satsuke’s whatsit for a while.
Momo: *sulks* I never got a shiny weapon.
Spoo: *checks hair in reflection on Excalibur* 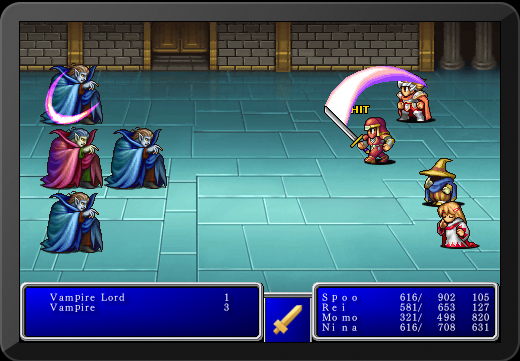 Rei: Sweeeeeeet. 900 hp.
Nina: Aim at the vampire lord, you idiot.
Momo: And here we see the first entry in our franchise’s ever-evolving “Overcompensating Much?” weapon. By Final Fantasy XX, Masamune will be ten light years long with spikes large enough to impale passing planets. From such humble beginnings, legends are born.
Spoo: *thinks Excalibur is shinier* 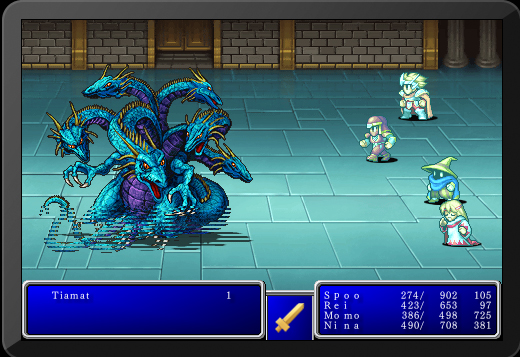 Rei: DIE DIE DIE DIE SWISHY SMACK.
Nina: Four down, one unknown Big Bad Behind the Big Bads to go.
Momo: It’ll turn out to be the Randomized Bonus Dungeon dude after all. Just you wait.
Spoo: *prepares to smite with extreme prejudice* 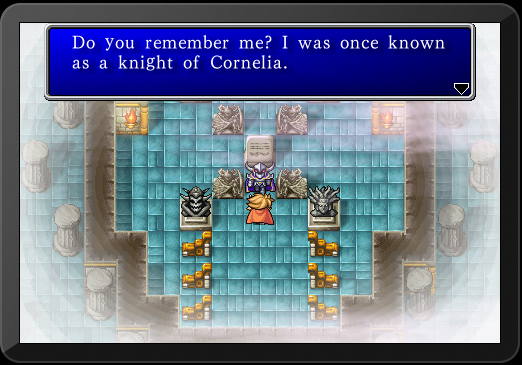 Rei: Oh for cryin’ out loud. We killed you at the beginning of the game.
Nina: As pickup lines go, that one needs work.
Momo: KNOCK HIM DOWN!
Spoo: *prepares for knockage*

“Oh, you did defeat me then. But the four great forces saved me by sending me back through time!” 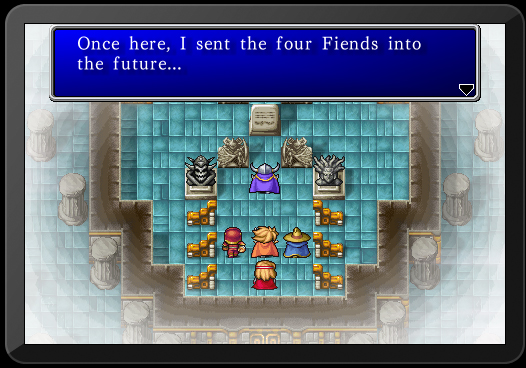 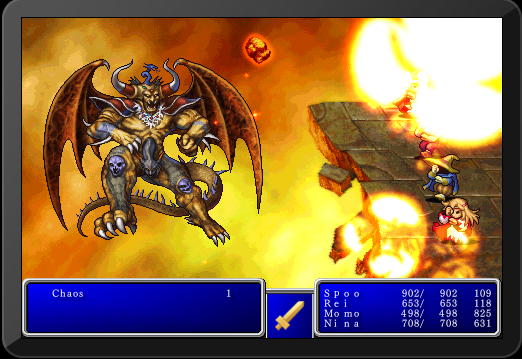 Rei: It’s not the Flare spell that bothers me. It’s that he’s got a gargoyle head sticking out of his crotch.
Nina: And yet another questionable Final Fantasy design trope was born. (And yes, it was there in the original 8-bit graphics).
Momo: Um, guys? I am suddenly keenly aware that I never got around to purchasing Flare in a magic shop.
Spoo: *ow ow owie ow* 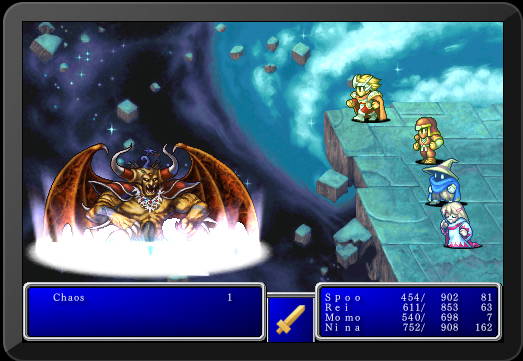 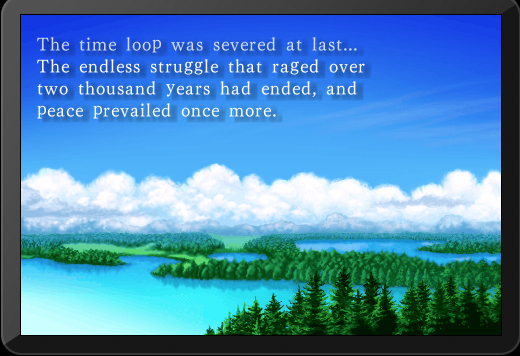 Rei: Okay, whatever. Now about that reward…
Nina: We saved the mermaids, Rei, remember?
Momo: Hey, don’t we get a post-battle FMV or somethin’?
Spoo: *.oO(This IS the FMV)*

Blah blah blah, a really longwinded and convoluted and preachy epilogue that desperately needs an editor…. 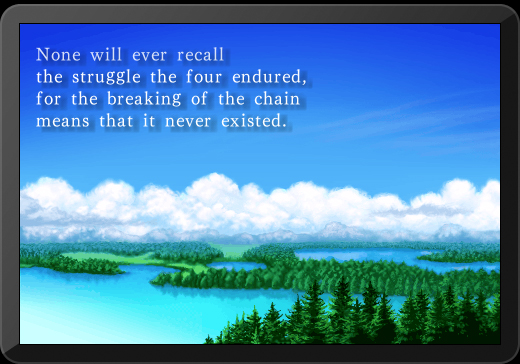 Rei: Someone wake me up when it’s done. I’m so ready for that Mermaid Spa & Resort.
Nina: Um… hang on… so we won’t remember this either?
Momo: Awwww. Too bad, Spoo. Your hot date with the prince of Elfland? Never happened.
Spoo: *DO NOT WANT* 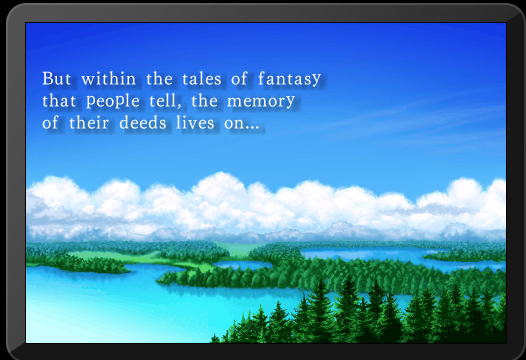 Nina: So, everybody forgets, but they don’t? It didn’t happen…but it…
Rei: Now who’s trying to deconstruct the fridge logic?
Momo: Er, sorry, Spoo. Maybe he’ll remember you in his fantasies?
Spoo: *lip wobble*

…and a few last platitudes… 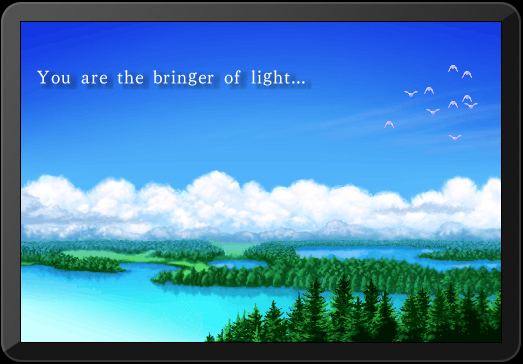 Rei: WE ARE LUCIFER!? KEEEWL.
Nina: Classical educations are a terrible thing to waste.
Momo: Um, guys? I think I broke the Spoo.
Spoo: *uncontrollable sobbing* 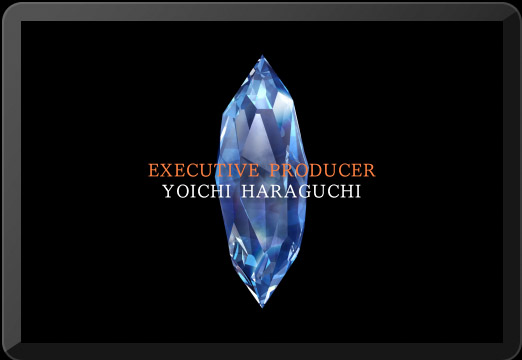 ALL: BEHOLD THE SHINY!

And so it was that the world was saved, but not for Spoo.

His memory of sweet hours spent in the Nameless Elf Prince’s arms faded. Likewise, the Elf Prince could never recall, save in passing dreams, the bishie hero who had awakened him with a kiss, swept him off his feet and invited him to tea. As in other epic fantasy stories, the hero had to sacrifice his Twue Wuv in order to — 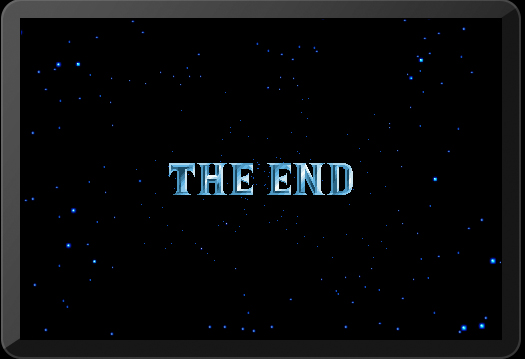